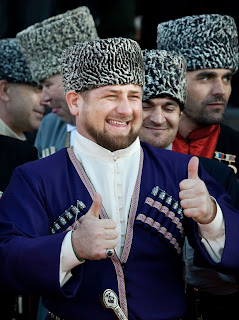 Ramzan is a son of former Chechen President Akhmad Kadyrov, assassinated in May 2004. In February 2007 Kadyrov replaced Alu Alkhanov as President, shortly after he had turned 30, which is the minimum age for the post. He has the support of former Russian President Vladimir Putin and was awarded the Hero of Russia medal, the highest honorary title of Russia. Kadyrov was engaged in violent power struggles; with fellow Chechen government warlords Sulim Yamadayev and Said-Magomed Kakiev for overall military authority, and with Alu Alkhanov for political authority.
As President of Chechnya, Kadyrov has been credited for bringing some peace and stability to the region. He has also launched federally-sponsored renovations of the Chechen capital Grozny, which have completely transformed the war-ravaged city. On the other hand, he has come under heavy criticism from international press and even at times, Russia, for allegations of corruption and human rights violations.
Ramzan Kadyrov is an honorary member of the Russian Academy of Natural Sciences (not to be confused with the much more prestigious Russian Academy of Sciences).
Early life 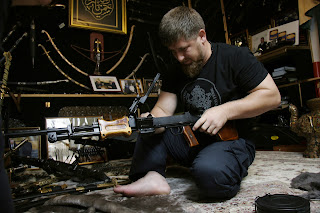 A reckless and impetuous person at school, Ramzan Kadyrov strove to gain the respect of his father Akhmad Kadyrov, a Muslim imam. He claims that he always emulated his father. Ramzan enjoys boxing and once met with former heavyweight boxing champion Mike Tyson.
In the early 1990s, as the Soviet Union splintered into fragments, the Chechens launched a bid for independence. The Kadyrovs joined the struggle and fought against the federal forces, with Ramzan, from the age of 16, leading a small unit of separatist fighters in the First Chechen War, and Akhmad becoming the rebel mufti of Chechnya.
Militia leader 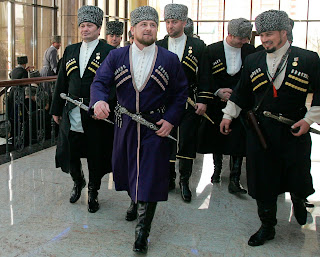 The Kadyrov clan defected to the Moscow side at the beginning of the Second Chechen War in 1999. Since then, Ramzan has led his militia with support from Russia's FSB state security service (including service ID cards) and become the head of the Chechen Presidential Security Service. The militia became later known as the Kadyrovites.
He was falsely rumoured to have died of a gunshot wound inflicted by his bodyguard on 28 April 2004.
Deputy Prime Minister
After his father, then Chechen President, was assassinated on 9 May 2004, Ramzan was appointed Deputy Prime Minister of the Chechen Republic. 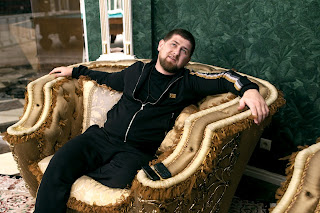 When his sister was detained by the Dagestan police in January 2005, Ramzan and some 150 armed men drove to the Khasavyurt City Police (GOVD) building. According to the city mayor, Kadyrov's men surrounded the GOVD, forcing its duty officers against the wall and assaulted them, after which they left the building with Zulai Kadyrova, "victoriously shooting in the air."
In August 2005, Ramzan declared that "Europe's largest mosque" would be built in place of the demolished ruins of Grozny's shattered downtown. He also claimed that Chechnya is the "most peaceful place in Russia" and in a few years it would also be "the wealthiest and the most peaceful" place in the world. He said that the war was already over with only 150 "bandits" remaining (as opposed to the official figures of 700 to 2,000 rebel fighters), and that thanks to his father, 7,000 separatists had already defected to the Russian side since 1999. When responding to a question on how he is going to "avenge the murder of his father", Ramzan said:

I've already killed him, whom I ought to kill. And those, who stay behind him, I will be killing them, to the very last of them, until I am myself killed or jailed. I will be killing [them] for as long as I live... Putin is gorgeous. He thinks more about Chechnya than about any other republic [of the Russian Federation]. When my father was murdered, he [Putin] came and went to the cemetery in person. Putin has stopped the war. Putin should be made president for life. Strong rule is needed. Democracy is all but an American fabrication... Russians never obey their laws. Everyone was stealing, and only Khodorkovsky is in jail.
Acting Prime Minister 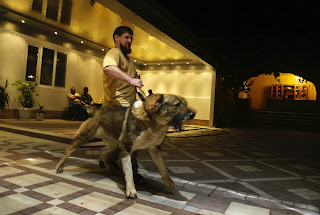 Following a car accident in December 2005, in which Chechnya's prime minister Sergey Abramov was injured, Ramzan functioned as the caretaker prime minister. He immediately proceeded to implement elements of Sharia law, such as declaring a ban on gambling and alcohol production, while speaking in favour of polygamy.
In February 2006, responding to the publication of the Mohammed cartoons, he accused the Danes of "spying" and being "pro-terrorist". He also banned Danish citizens from entering Chechnya, effectively banning activity of the Danish Refugee Council, the largest NGO working in the region. Kadyrov is quoted as saying, "That cartoonist needs to be buried alive." He was eventually pressed to overturn this decision by Moscow, a rare example of federal intervention in Kadyrov's rule in the republic.
Prime Minister 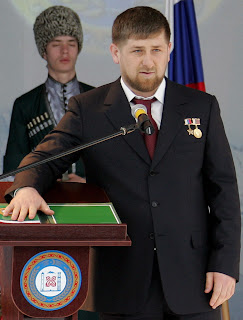 On 1 March 2006, Sergey Abramov resigned from the position of prime minister and told Itar-Tass news agency that he did so "on the condition that Ramzan Kadyrov lead the Chechen government." This was followed by a decree of Kadyrov forcing women to wear headscarves; he also rejected a federal appropriation of the republic's budget, demanding more money, and called for all federal forces but the border guards to be withdrawn.
Shortly after taking office, Kadyrov approved a project to erect a presidential palace on a 30-acre (120,000 m2) plot by the Sunzha River in ruined downtown Grozny. The project, which will also include a five-star hotel and recreational facilities, is estimated to cost around 1.5 billion rubles ($54 million USD) to build. Later, Kadyrov called for refugee camps scattered across Chechnya to be closed down, calling the refugees "international spies who are interested in stoking conflict between Chechnya and Russia, who are seeking to destabilize the situation in our region". Reuters quoted him as saying that "liquidating the refugee camps will allow us to uncover spies who are working for foreign intelligence services". 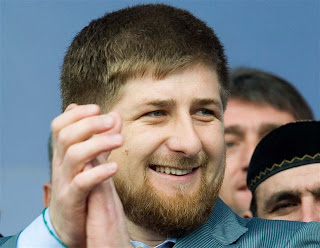 On 5 June 2006, Speaker of the Chechen People's Assembly Dukvakha Abdurakhmanov said at a press conference in Moscow that "there is no alternative" to Kadyrov for the presidency; Kadyrov has "exclusive awards in combat, and has made achievements in improving the peaceful life and in human rights protection. Who could replace him at this stage? Nobody," he said. Later that year, Umar Dzhabrailov, Chechnya’s representative in the Federation Council and a close ally of Kadyrov's, urged Dukvakha Abdurakhmanov to initiate a measure calling on Kadyrov to become the republic’s president, thereby replacing Alu Alkhanov. The following week, several Russian newspapers reported that a worsening security situation in Chechnya was lessening the likelihood that Kadyrov would replace Alu Alkhanov as the republic's president. Other media, however, reported that Kadyrov continued to strengthen his position at Alkhanov's expense. 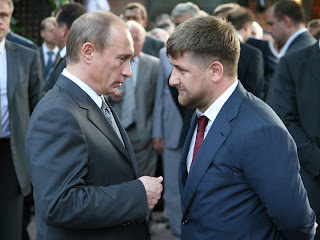 On 6 December 2006, Kadyrov said he that he would seek the prosecution of the commanders of federal military units responsible for the death or disappearance of civilians in Chechnya (specifically Major General Aleksandr Studenikin). In addition, Kadyrov said the war in Chechnya was unleashed not by the Chechen people but by the Russian leadership. Kadyrov’s comments may have represented his government’s increasing unhappiness with certain figures in Moscow, who were said to be blocking his elevation to the post of Chechen president. In 2006, leaked cables from an American diplomat recounted a lavish wedding attended by Kadyrov in Russia's Caucasus region in which guests threw $100 bills at child dancers, and which had nighttime "water-scooter jaunts on the Caspian Sea", and a report that Ramzan Kadyrov gave the newly married couple a "five-kilo lump of gold". 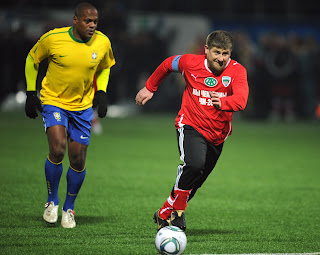 On 5 February 2007, Kadyrov said he did not aspire to become the Chechen president; however, he criticized Alkhanov. Kadyrov also claimed the war in Chechnya was ultimately finished, with "all informal armed groups eliminated". Alkhanov, for his part, criticized "the cult of personality and idealization of one person," a clear reference to Kadyrov, whose enormous portraits are prominently displayed in Grozny.
President
On 15 February 2007, Putin signed a decree removing Alkhanov and installing Kadyrov as Chechen's acting president. On 2 March 2007, following Putin's nomination of Kadyrov as Chechen president, the Chechen parliament approved the nomination. In the following days, serious changes took place in the administrative set-up of the republic, affecting both the top- and middle-ranking officials. Former deputy prime minister Odes Baysultanov (a cousin of Kadyrov's) was elevated to the vacant post of prime minister. Critics allege that Ramzan Kadyrov is actively building his own "vertical of power" in the republic, and encouraging nepotism by placing men of the Beno clan in all the leading and important positions. 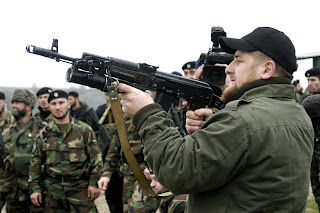 A Russian daily, Gazeta, reported that according to a poll conducted by the independent Levada Center, only 33 percent of Russians believe that Ramzan Kadyrov can be trusted, while 35 percent believed that he cannot. Asked whether they thought Kadyrov could normalize the situation in Chechnya and end the bloodshed there, 31 percent said yes and 38 percent said no.
On 14 March 2007, Kadyrov said that human rights abuses were "a thing of the past" in his republic, rejecting new charges of torture made by the Council of Europe. Two days later he accused the federal authorities of torturing detainees. On 19 March 2007, Kadyrov vowed to put an end to all remaining guerilla activity in Chechnya within two months. On 5 April 2007, Kadyrov was sworn in as President of Chechnya. 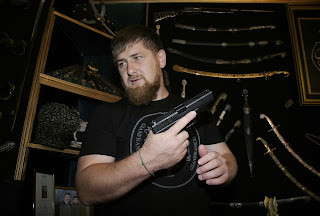 After the car-bomb attack on Yunus-bek Yevkurov, president of the neighboring Republic of Ingushetia, which took place on 22 June 2009, Kadyrov claimed that the Kremlin had ordered him to fight insurgents there, and during his subsequent visit to the republic on 24 June pledged ruthless vengeance.
Late December 2009 Kadyrov claimed that remaining rebels where getting financed by "The West"; "I officially declare this: those who destroyed the Soviet Union, those who want to destroy the Russian Federation, they stand behind them". He also suggested he did not seek another term as President and that Russia should attack Georgia and Ukraine "It's Russia's private affliction; why should we always suffer if we can eradicate this for good?".
Personal life 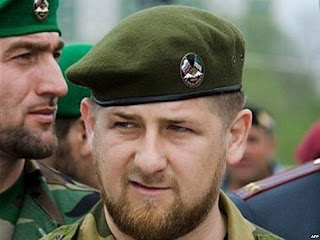 Kadyrov is married and has seven children: Ahmad, Adam, Aishat, Karina, Hedy and Tabarik. Kadyrov is a noted collector of sports cars. He is also known for his extensive collection of Chechen daggers. On 5 October 2011 he celebrated his 35th birthday in a lavish fashion in the presence of several Hollywood stars, including the actor Jean-Claude van Damme and the actress Hilary Swank as well as Lebanese pop Artist Rola Saad, British violinist Vanessa-Mae, singer Seal and many others. When asked where the money for the live-televised celebration were coming from, he reportedly laughed and said that "Allah gives it to us".
From : www.wikipedia.org
Posted by Robbyen at 2:25 AM