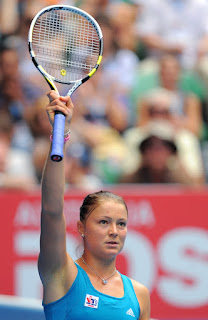 Dinara Mikhailovna Safina (Russian: Динара Михайловна Сафина, Tatar: Динара Мөбин кызы Сафина, Dinara Möbin kızı Safina), born April 27, 1986 in Moscow, is a Russian professional tennis player of Tatar background. Safina's career high ranking is World No. 1.
Safina was runner up in singles at the 2008 French Open, 2009 Australian Open, and the 2009 French Open, falling to Ana Ivanović, Serena Williams, and Svetlana Kuznetsova, respectively. She has had success at Grand Slam events in women's doubles by winning the 2007 US Open with Nathalie Dechy. She also won the Olympic silver medal in women's singles at the 2008 Summer Olympics in Beijing.
She is the younger sister of former World No. 1 men's player Marat Safin. She and her brother are the first brother-sister tandem in tennis history to both achieve No.1 rankings.
Biography 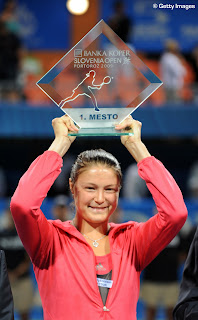 Playing style : Safina's game is built on her powerful groundstrokes which are hit heavy and deep. Her forehand is the side where she hits more winners. Her backhand hits accurately and can open up the court. She also produces a high number of unforced errors. For her height, her serve has been considered lacking in power and precision. It is inconsistent, thus delivering a high number of double faults. This is often attributed to an unusually high, and therefore inconsistent ball toss. Safina's best surface is clay, while grass courts are her weakest surface. Through the years, she has struggled with the mental aspect of tennis. Her groundstrokes often turn erratic when she struggles with her mental game.
Early life : Safina was born in Moscow, Russia to ethnic Tatar parents. Her mother, Rauza Islanova, was her trainer when she was younger; while her father is director of the Spartak tennis club in Moscow. Her brother Marat is a former world No. 1 on the ATP Tour. Speaking of growing up in such a successful tennis family, Safina stated: "Being the little sister in such a big tennis family is not an easy situation. Maybe that's why it took me longer to develop. My father is very competitive, but my parents didn't put pressure on me. I wanted to find my identity. I wanted to be something by myself, like being a big player by myself. 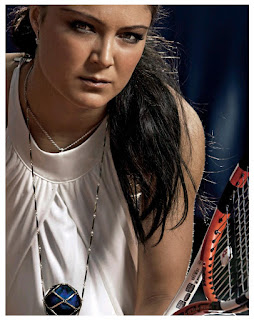 So at the beginning I was putting too much pressure on myself. But then gradually I found myself, and I learned how to do better with that situation." At age 8, Safina and her family moved to Valencia, Spain, and as a result Safina speaks fluent Spanish as well as Russian and English.
Previously, Safina was coached by Glen Schaap, former coach of Anna Chakvetadze and Nadia Petrova, and Željko Krajan, who worked with her during her rise to No. 1 in 2009. From May 2010, she begun working with Gastón Etlis. Their partnership ended after several months and since February 2011 she has been working with Davide Sanguinetti.
Safina's idols growing up were Steffi Graf, Martina Hingis and Lindsay Davenport. More recently, she has stated that she idolises Rafael Nadal. Safina states that she has few friends on the Tour, saying: "I'm not really looking for some friends because I have my team. I travel with my coach and my fitness coach. So, with both of them, I have enough. I don't need anyone else."
From : www.wikipedia.org
Posted by Robbyen at 9:42 PM