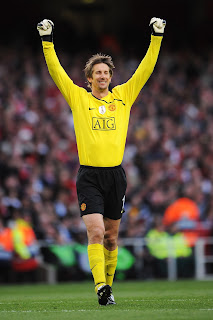 Edwin van der Sar OON (born 29 October 1970) is a former footballer who played as a goalkeeper for AFC Ajax, Juventus, Fulham and Manchester United. He is the most capped player in the Netherlands national football team's history. He currently works as an analyst and has stated an interest in coaching in the near future.
He started his senior career at Ajax and is considered to be a member of a golden generation of players at the club. He remained there for nine years before moving to Italian club Juventus and then to England, first to Fulham and then to Manchester United. He is one of the few footballers to have won the UEFA Champions League with two different teams – with Ajax in 1995 and Manchester United in 2008; in the latter, he was also named UEFA Man of the Match. Van der Sar also won the UEFA Cup with Ajax in 1992.
Throughout a long and successful career, Van der Sar achieved and set numerous records. In the 2008–09 season he set the world league clean sheet record by not conceding a single goal for 1,311 minutes. Along with being the most capped player for the Netherlands national team, with 130 caps, he is also the oldest player to win the Premier League, at 40 years and 205 days old. 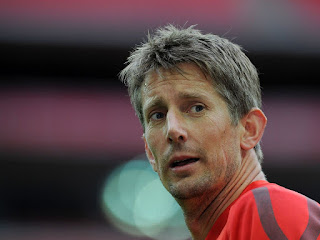 Individually Van Der Sar has won several honours, including Best European Goalkeeper in 1995, 2008, 2009 and 2010, and UEFA Club Goalkeeper of the Year in 1995 and 2009. He is considered, by critics and fellow players, as one of the greatest goalkeepers of all time.
Personal life
Van der Sar is married to Annemarie van Kesteren, the couple's wedding ceremony took place at the Beurs van Berlage in Amsterdam, on 20 May 2006. The couple have two children: a son, Joe, and a daughter, Lynn. Joe was on the pitch celebrating when his father saved a penalty in the Netherlands' 5–4 shoot-out victory over Sweden in the Euro 2004 quarter-finals. In December 2009, Van Kesteren was admitted to hospital just two days before Christmas, reports said she had suffered a suspected brain haemorrhage and was in a "very poor" condition. Van der Sar was granted indefinite leave following his wife's collapse and it is understood that she has made a good recovery with no long term effects.
From : www.wikipedia.org
Posted by Robbyen at 9:31 AM