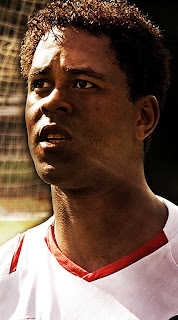 Patrick Stephan Kluivert ( born 1 July 1976) is a former Dutch footballer, currently head coach of the youth side of FC Twente. He played as a striker for AFC Ajax, A.C. Milan, FC Barcelona, Newcastle United, Valencia CF, PSV Eindhoven, and Lille OSC. Kluivert played for the Dutch national team from 1994 to 2004. He is their all-time leading goalscorer with 40 goals. In 2004, he was named in the FIFA 100, a list of the 125 greatest living footballers chosen by Pelé as part of FIFA's centenary observances.

Early life
Patrick Stephan Kluivert was born on 1 July 1976 in Amsterdam, Netherlands. His father, a professional football player, was born in Calcutta, Suriname and his mother in Curaçao.
Kluivert learned to play football on the street. After he played for football club Schellingwoude one year, he joined the AFC Ajax youth academy at the age of seven. During his younger years, he played several different positions, even as a defender. He was strong in technique, football intelligence, and speed, but his personality was considered too impulsive.
Kluivert played for the Dutch national teams under-15, under-16 and under-17. 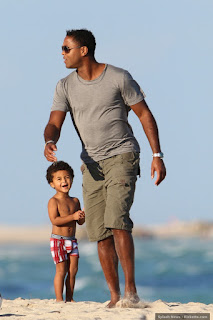 Playing style
For such a tall player, Kluivert possessed a remarkably impressive 'first touch' and quick feet. Similar to footballer Ronaldo, he often used the Cruijff Turn to great effect to go past defenders. Kluivert also utilised his height and physique to dominate aerial balls and was considered to possess one of the best headers in the contemporary game.
Personal life
In 1997, Kluivert was charged with manslaughter following his involvement in a fatal car accident in which Marten Putman, a theatre director, was killed. He was found guilty and received community service and a driving ban.
On 24 September 2007, Kluivert's wife Rossana Lima gave birth to a baby boy, named Shane Patrick. He has three sons, Quincy, Justin and Ruben from his first marriage.
He was born on exactly the same day as fellow Dutch striker Ruud van Nistelrooy.
From : www.wikipedia.org
Posted by Robbyen at 7:38 PM