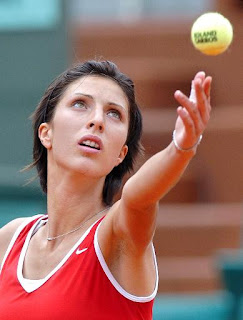 Anastasiya Andreyevna Myskina (Анастасия Мыскина; born July 8, 1981, Moscow, Russia) is a professional tennis player from Russia. She won the 2004 French Open singles title, becoming the first Russian female tennis player to win a Grand Slam main draw singles title. Subsequent to this victory she rose to number 3 on the WTA ranking, becoming the first Russian female tennis player to reach the top three in the history of the rankings. In September 2004 she reached a career high of No.2, but she has not played professional tennis since 2007, and has stated she does not know whether she will return or not. Injury has prevented her from advancing for the past several years.
Personal Life
In October 2002, Myskina had a series of photos taken for GQ magazine by the photographer Mark Seliger for a spread in the October 2002 edition of GQ, in which one approved photo of her fully clothed was published. 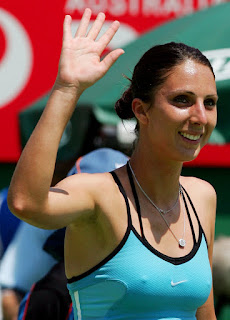 On June 19, 2005, U.S. District Judge Michael Mukasey, later United States Attorney General, ruled that Anastasia Myskina could not stop the distribution of the topless photos, because she had signed a release. Myskina had claimed that she did not understand the photo release form and that she was not fluent in English at the time.
Myskina announced that she was pregnant with her first child, due in May 2008. She has previously dated Russian hockey player Konstantin Korneyev, but refuses to state the name of the father. On April 28, 2008 Myskina gave birth to her first child, a boy named Zhenya.
From : www.wikipedia.org
Posted by Robbyen at 11:12 PM