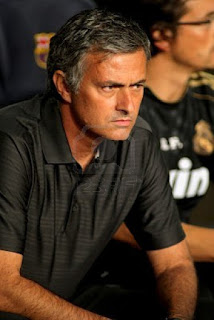 José Mário dos Santos Félix Mourinho (born 26 January 1963 in Setúbal) is a Portuguese football manager and the current manager of Real Madrid. He is commonly known as "The Special One". Mourinho is regarded by some players, coaches, and critics as one of the best ever coaches in football.
Mourinho started out as a player but he was unable to forge a meaningful career in the game and eventually switched to management. After spells working as an assistant manager and a youth team coach in the early 1990s, he became an interpreter for Sir Bobby Robson. There he worked with him at Sporting Clube de Portugal and Porto in Portugal, before following him to Spanish club Barcelona. He remained in the Catalonian club after Robson's departure and worked with the successor, Louis van Gaal.
He began focusing on coaching and impressed with brief but successful managerial periods at Benfica and União de Leiria. He returned to Porto in 2002, this time as head coach, winning the Primeira Liga, Taça de Portugal, and UEFA Cup in 2003. In 2004 Mourinho guided the team to the top of the league for a second time and won the highest honour in European club football, the UEFA Champions League. 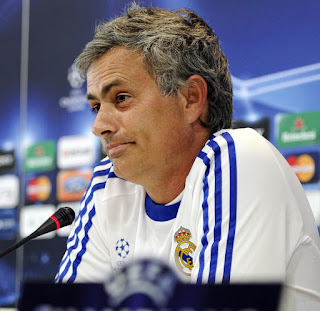 Mourinho moved to Chelsea the following year and won two consecutive Premier League titles in 2005 and 2006. He often courted controversy for his outspokenness, but his victories at Chelsea and Porto established him as one of the world's top football managers.
In mid-2008 he moved to Italy's Serie A, signing a three-year contract with Internazionale. Within three months he had won his first Italian honour, the Supercoppa Italiana, and completed his first season in Italy by winning the Serie A league title. Mourinho followed on from that the next season by winning the first treble in Italian history, the Serie A league title, Coppa Italia, and the UEFA Champions League, thus becoming the third manager in football history to win two UEFA Champions League with two different teams, after Ernst Happel and Ottmar Hitzfeld. Due to these achievements he won the first ever FIFA Ballon d'Or Best Coach Award in 2010. 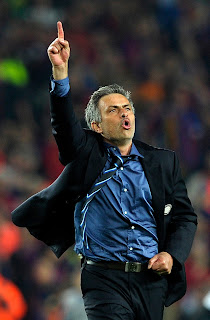 On 28 May 2010, his appointment as head coach at Real Madrid was confirmed, signing a four-year contract. His first honour with the team was winning the 2011 Copa del Rey Final, the first time Madrid had won the competition since 1993.
Early Life
José Mário dos Santos Félix Mourinho was born in 1963 to a large middle-class family in Setúbal, Portugal, the son of Félix Mourinho and wife Maria Júlia Carrajola dos Santos. His father played football professionally for Os Belenenses and Vitória de Setúbal, earning one cap for Portugal in the course of his career. His mother was a primary school teacher from an affluent background; her uncle funded the construction of the Vitória de Setúbal football stadium. The fall of António de Oliveira Salazar's Estado Novo regime in April 1974, however, led to the family losing all but a single property in nearby Palmela. 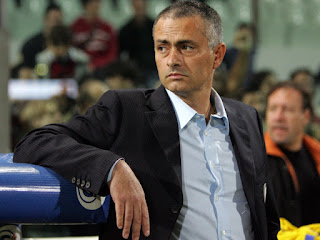 From an early age, football was a major part of Mourinho's life. Footballing commitments in Porto and Lisbon meant that Félix was often separated from his son. As a teenager, Mourinho travelled to attend his father's weekend matches and when his father had became a coach, Mourinho began observing training sessions and scouting opposing teams. Mourinho wanted to follow in the footsteps of his father by becoming a footballer and so he joined the Belenenses youth team. Graduating to the senior level, he played at Rio Ave (where his father was coach), Belenenses, and Sesimbra. He lacked the requisite pace and power to become a professional and chose to focus on becoming a football coach instead.
His mother enrolled him in a business school, Mourinho dropped out on his first day, deciding he would rather focus on sport, and chose to attend the Instituto Superior de Educação Física (ISEF), Technical University of Lisbon, to study sports science. He taught physical education at various schools and after five years, he had earned his diploma, receiving consistently good marks throughout the course. After attending coaching courses held by the English and Scottish Football Associations, former Scotland manager Andy Roxburgh took note of the young Portuguese's drive and attention to detail. Mourinho sought to redefine the role of coach in football by mixing coaching theory with motivational and psychological techniques. 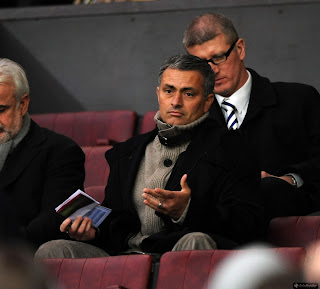 Mourinho met his wife Matilde "Tami" Faria, born in Angola, when they were teenagers in Setúbal, Portugal, and the couple married in 1989. Their first child, daughter Matilde, was born in 1996 and they had their first son, José Mário, Jr., four years later. Mourinho, whilst dedicated to football, describes his family as the centre of his life and has noted that the "most important thing is my family and being a good father." He was selected as the New Statesman Man of the Year 2005 and was described as a man devoted to both his family and his work. Mourinho has also been a part of social initiatives and charity work, helping with a youth project, bringing Israeli and Palestinian children together through football and donating his "lucky" jacket to Tsunami Relief, earning £22,000 for the charity. José Mourinho is a Catholic.
Widely known for his strong personality, refined dress sense, and quirky comments at press conferences, Mourinho has experienced fame outside of football circles, featuring in European advertisement campaigns for Samsung, American Express and adidas, amongst others. An unofficial biography of Mourinho, titled O Vencedor – De Setúbal a Stamford Bridge (The Winner – from Setúbal to Stamford Bridge), was a best seller in Portugal. However, Mourinho did not authorise the biography and attempted, unsuccessfully, to prevent the book from being published. 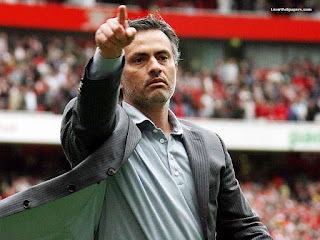 Mourinho was part of an unusual event in May 2007 when he was arrested for preventing animal welfare officials from putting his dog in to quarantine. The dog had not been sufficiently inoculated but the situation was resolved after it was returned to Portugal and Mourinho received a police caution.
In 23 March 2009, José Mourinho was awarded a doctorate honoris causa degree by the Technical University of Lisbon for his accomplishments in football.
Mourinho speaks Portuguese, Spanish, Italian, French and English fluently. He also speaks Catalan. In October 2010, Mourinho was ranked No.9 on the list of Most Influential Men published by AskMen.com. In December 2011 he was named 'Rockstar of the year' by the Spanish version of Rolling Stone magazine.
From : www.wikipedia.org
Posted by Robbyen at 6:45 AM