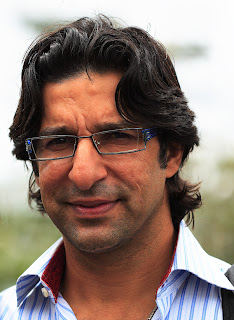 Wasim Akram (Punjabi: وسیم اکرم; born 3 June 1966) is a former Pakistani left arm fast bowler and left-handed batsman in cricketer and model. who represented the Pakistan national cricket team in Test cricket and One Day International (ODI) matches.
Akram is regarded as one of the best fast bowlers in the history of cricket. He holds the world record for most wickets in List A cricket with 881 and is second only to Sri Lankan off-spin bowler, Muttiah Muralitharan in terms of ODI wickets with 502. He is considered to be one of the founders and perhaps one of the finest exponents of reverse swing bowling.
He was the first bowler to reach the 500-wicket landmark in ODI cricket during the 2003 World Cup. In 2002 Wisden released its only and final list of best players of all time. Wasim was ranked as the best bowler in ODI of all time with a rating of 1223.5, ahead of Allan Donald, Imran Khan, Waqar Younis, Joel Garner, Glen McGrath and Murali. 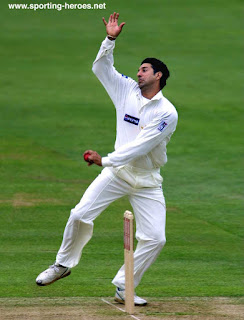 Wasim has taken 23 4-wicket hauls in ODI in 356 matches he played. On 30 September 2009, Akram was one of five new members inducted into the ICC Cricket Hall of Fame.
Early and personal life
Akram was born in Lahore, Pakistan on 3 June 1966, to a moderately affluent middle-class family. He was educated at Islamia College in Lahore, where he played as an opening bowler and batsman. Like several other Pakistani cricketers during the 1980s, his inclusion into the national side was at the behest of a senior player in the team, which in Akram's case, was Javed Miandad.
Akram was diagnosed with diabetes at the peak of his career but despite the initial psychological blow, he managed to regain his form and went on to produce fine cricketing performances. Since then he has actively sought to be involved in various awareness-raising campaigns for diabetes.
He was married to Huma in 1995. They had two sons Taimur and Akbar from their marriage of fifteen years. Huma died of multiple organ failure at Apollo Hospital in Chennai, India on 25 October 2009.

Award and records
Akram was awarded Wisden Cricketer of the Year in 1993 for his sporting achievements. He was awarded Lux Style Award for Most Stylish Sports Person in 2003.
* In his Test career, Akram took 414 wickets in 104 matches, a Pakistani record, at an average of 23.62 and scored 2,898 runs, at an average of 22.64.
* In One Day Internationals, Akram took 502 wickets in 356 appearances, at an average of 23.52 and scored 3,717 runs, at an average of 16.52.
* Akram was the first bowler in international cricket to take more than 400 wickets in both forms of the game and only Muttiah Muralitharan has since achieved this.
* Akram also held the record for the most wickets in Cricket World Cups, a total of 55 in 38 matches. Australia's Glenn McGrath broke the record during the 2007 Cricket World Cup, ending with a final tally of 71 from 39 matches. On passing Wasim's record, McGrath said, "Wasim Akram, to me, is one of the greatest bowlers of all time. Left-armer, swung it both ways with the new ball and he was so dangerous with the old ball. To go past him is something I will always remember. Probably the other side of the coin is that if you play long enough, you're going to break records here and there."
* Akram took four hat-tricks in international cricket, two each in Tests matches and One Day Internationals. He is the only bowler in cricket to have achieved four hat-tricks. He was the third of only three bowlers to have taken two Test cricket hat-tricks, the others being Hugh Trumble and Jimmy Matthews. Akram was also the first of only five bowlers to have taken two One Day International cricket hat-tricks. Akram's Test hat-tricks are significant, since they were taken in consecutive Test matches in the same series, a game played against Sri Lanka in the 1998-99 Asian Test Championship. Akram is also one of only two bowlers to have taken both a Test match and One Day International hat-trick, the other being Pakistan fast bowler, Mohammad Sami.
* Playing in a Test series against the West Indies at Lahore in 1990–1991, he became one of only six players to have taken four wickets in an over during a Test match. In Akram's case, these achievement was not part of a hat-trick, the third ball he delivered to the batting opposition was a dropped catch, which allowed a single run.
* Akram has also achieved the highest score by a number eight batsman in Test cricket when he scored 257 runs not out from 363 balls against Zimbabwe at Sheikhupura. The innings contained 12 sixes which is also a world record for Test cricket.
* He also has the third highest number of Man of the Match awards in Test cricket, with seventeen.
* He has scored the record number of runs in One Day International matches by a player who has never scored a One Day International hundred. His highest score was 86 runs.
From : www.wikipedia.org
Posted by Robbyen at 7:46 AM