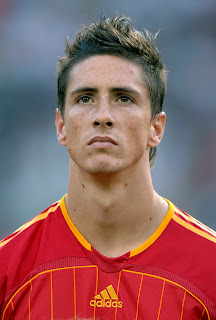 Fernando José Torres Sanz (born 20 March 1984), nicknamed El Niño (The Kid in Spanish), is a Spanish footballer who plays for Chelsea and the Spain national team as a striker.
Torres started his career with Atlético Madrid, progressing through their youth system to the first team squad. He made his first team debut in 2001 and finished his career with the club having scored 75 goals in 174 La Liga appearances. Prior to his La Liga debut, Torres played two seasons in the Segunda División, making 40 appearances and scoring seven goals. He joined Premier League club Liverpool in 2007 after signing for a club record transfer fee. He marked his first season at Anfield by being Liverpool's first player, since Robbie Fowler in the 1995–96 season, to score more than 20 league goals in a season. Torres became the fastest player in Liverpool history to score 50 league goals after scoring against Aston Villa in December 2009. He left the club in January 2011 to join Chelsea for a record British transfer fee of £50 million, which also made him the most expensive Spanish player in history. 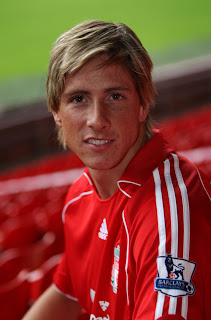 Torres is a Spanish international and made his debut for the country against Portugal in 2003. He has since participated in four major tournaments, UEFA Euro 2004, the 2006 FIFA World Cup, UEFA Euro 2008 and the 2010 FIFA World Cup. Torres did not score at Euro 2004, but netted three at the 2006 World Cup. He scored twice at UEFA Euro 2008, including the winning goal for Spain in their 1–0 win over Germany in the Final. He won the 2010 World Cup with Spain, but did not score any goals during the tournament.
Early Career
Born in Fuenlabrada, Community of Madrid, Torres became interested in football as a child and joined his first team, Parque 84, at the age of five. His father José Torres worked during Torres' childhood, and his mother Flori Sanz traveled daily with him to training sessions. His grandfather was not a passionate football fan, but took pride in being an Atlético Madrid supporter, and Torres inherited his love for the club. 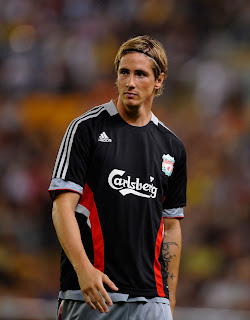 Torres started playing football as a goalkeeper, the position his brother played in. When he was seven years old, however, he started playing regularly as a striker in an indoor league for the neighborhood club, Mario's Holland, using the characters from the anime Captain Tsubasa as inspiration. Three years later, aged 10, he progressed to an 11-side team, Rayo 13. He scored 55 goals in a season and was one of three Rayo 13 players to earn a trial with Atlético. He impressed the scouts and joined the club's youth system at the age of 11 in 1995.
Personal Life
Torres' parents are José and Flori, and he has two older siblings, Israel (born 1977) and Maria Paz (born 1976). He married Olalla Domínguez Liste, with whom he had been in a relationship since 2001, on 27 May 2009 in a private ceremony with just two guests at the local town hall in El Escorial, Madrid. They had been an item for eight years and are thought to have met in the Galician seaside town of Estorde, where Torres would go on family holidays each year to escape the Spanish capital. 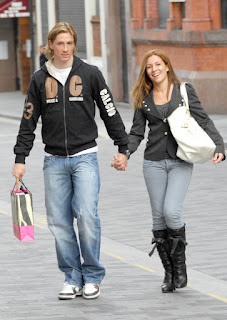 The couple have two children, a daughter, Nora, born on 8 July 2009 at the Hospital La Rosaleda, in Santiago de Compostela, and a son, born on 6 December 2010 at Liverpool Women's Hospital, with Torres missing the Aston Villa game at Anfield.
In 2009, it was reported that Torres has a personal fortune of £14 million. He features in the video for "Ya Nada Volverá A Ser Como Antes" by Spanish pop rock group El Canto del Loco, whose singer, Dani Martín, shares a strong friendship with the footballer. He makes a cameo appearance in the 2005 comedy film Torrente 3: El protector. In 2009, he released an autobiography entitled Torres: El Niño: My Story.
Style of play
He was considered to be a world-class striker and he is "quick, strong, impressive in the air, blessed with expert technique and is cool and collected in front of goal".
From : www.wikipedia.org
Posted by Robbyen at 6:14 AM