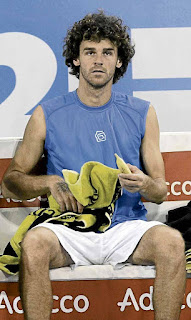 Gustavo Kuerten ( born September 10, 1976) is a retired former World No. 1 tennis player from Brazil. He won the French Open three times between 1997 and 2001, and was the Tennis Masters Cup champion in 2000. After 12 years on the international tour, he retired from top-level tennis in May 2008.
Kuerten is also known as "Guga" , an affectionate nickname which is a common abbreviation of the name "Gustavo" in Portuguese-speaking countries. He is a polyglot who speaks fluent Portuguese, Spanish, English and French.
Early life
Kuerten was born in Florianópolis in southern Brazil. He comes from an ethnically German family. He began playing tennis when he was six, an early start to a life and career marked by family tragedy. His father, a former amateur tennis player, died of a heart attack in 1985 while umpiring a junior tennis match in Curitiba, when Kuerten was only eight years old. His older brother, Raphael, is currently his business manager. His youngest brother suffered prolonged oxygen deprivation and consequently irreparable brain damage during birth, and as a result suffered from mental retardation and severe physical disability until his death in 2007. 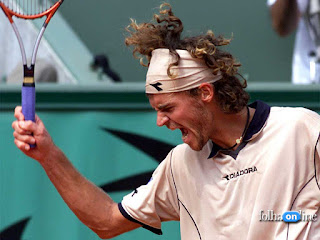 Kuerten was deeply affected by his brother's daily struggles, later donating the entire prize money from one tournament he has won every year of his professional career so far to a hometown NGO that provides assistance for people suffering from similar disabilities. He gave every trophy he won to his younger brother as a souvenir, including the three miniature replicas of the French Open men's singles trophy.
As a young player, Kuerten first learned from Carlos Alves. Alves would continue to coach Kuerten for the next 8 years. When he was 14 years old, Kuerten met Larri Passos who would be his coach for the following 15 years. Passos convinced Kuerten and his family that the youth was talented enough to make a living out of playing tennis. The two started traveling all over the world to participate in junior tournaments. Kuerten turned professional in 1995.
Professional career 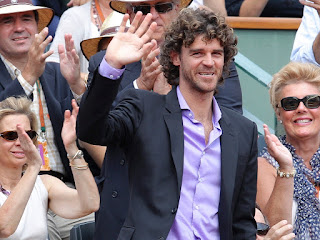 As a junior player in South America, Guga always stood out winning many of the most important tournaments in the region. Curiously, many times he played in an age group above his. For example, when he was 16 instead of playing in the category 15–16 he many times played in the category 17–18.
After two years as a professional, Kuerten rose to the position of no. 2 player in Brazil, second only to Fernando Meligeni, and had his then highest point by helping the Brazil Davis Cup team defeat Austria in 1996 and reach the competition's first division, the World Group.
Following his unexpected victory in the 1997 French Open, Kuerten had a difficult year and a half, adjusting to his sudden fame and the pressure of being expected to win. 1998 was the worst year in his career that was not related to injuries (in that year, Kuerten played beneath his potential, despite not being hindered by physical problems). The pressure for him to become an "ambassador" for tennis in Brazil was made evident after his early defeat to a then unknown Marat Safin in the 1998 French Open: the entire body of Brazilian journalists that had been dispatched to Paris to cover the event immediately returned home, leaving the rest of the tournament unaccounted for in Brazil. 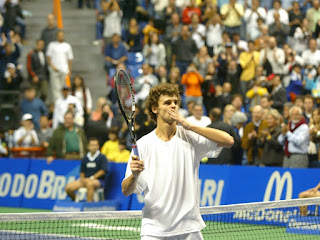 Like many South Americans his favorite court surface is clay. He has won three Grand Slam titles, all of them at the French Open, played on the clay courts of Roland Garros. He won these titles in 1997, 2000 and 2001. In every one of the three French Open victories he defeated Russia's Yevgeny Kafelnikov in the quarterfinal match and defeated exactly two Top 10 players on his way to the title. Kuerten became the No. 1 player in the world in 2000 using his unique serve and strong ground strokes.
Kuerten won at least one title a year between 1997 and 2004. The streak came to an end in 2005, when injuries and below-average performances kept him from winning tournaments. He was also a regular participant for Brazil in Davis Cup.
Kuerten embraces the baseline style of play, with heavily topspin ground strokes and a solid serve that enables him to wear down his opponent from the back of the court. His unique "grunt" when he strikes the ball is recognised by millions of fans around the world. He plays right-handed with a single-handed backhand using a western grip.
From : www.wikipedia.org
Posted by Robbyen at 10:50 PM