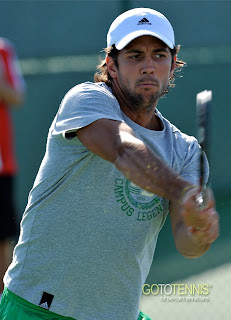 Fernando Verdasco Carmona (born 15 November 1983 in Madrid, Spain) is a professional tennis player. He is currently ranked no. 22 in the world. Verdasco started playing tennis at four years of age and had a full-time coach when he was eight. As of 2009, Verdasco has been working in Las Vegas with Andre Agassi and his team, including Darren Cahill (Agassi's former coach) and Gil Reyes (Agassi's fitness coach). Verdasco has aided Spain in winning three Davis Cup titles, winning the deciding match in both 2008 and 2009, he was part of the winning team in 2011 as well. His best performance in a Grand Slam was making the semifinals of the 2009 Australian Open, where he lost to compatriot and eventual champion Rafael Nadal in five sets in what was the longest match in Australian Open history.
Playing style and equipment
Verdasco is an offensive baseliner who is comfortable on all surfaces, with fast hard courts being his best. Verdasco considers his best shot to be his forehand, a shot that commentator Brad Gilbert often refers to as his "Fearhand". His serve is characteristic of a left-handed player predominantly using slice to create a lot of spin, and is capable of speeds exceeding 230 km/h. 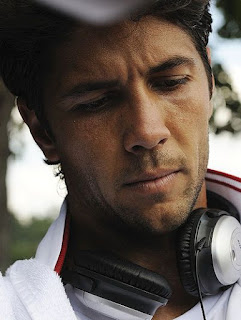 He is known for rivaling compatriot Rafael Nadal with the amount of topspin he can put on a ball. which partly explains his improved results since 2009, but still struggles with his nerves when facing the best players in the world. He is endorsed by adidas (he wears the Edge Group and Barricade V ) and recently switched to Dunlop Sport for racquets, after having played with Tecnifibre for the majority of his career (and with Yonex for a very short time in 2010). He is currently using the Dunlop Biomimetic 300.
Personal life
Verdasco began playing tennis when he was four years old, practicing with his father on the two hard courts in the backyard of their family home. He stopped school years at the age of 11, soon after practising with his father who then took his son into the academy's hands. His parents, José and Olga, who are of Latin American descent, own a restaurant in Madrid. He has two younger sisters, Sara and Ana. Verdasco was diagnosed with ADHD when he was a child, but did not receive treatment in order to not have problems with doping.
From : www.wikipedia.org
Posted by Robbyen at 10:59 PM