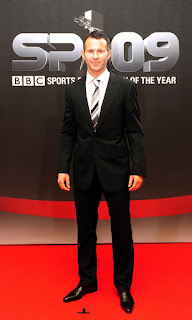 Ryan Joseph Giggs OBE (born Ryan Joseph Wilson on 29 November 1973) is a Welsh professional footballer who plays for Manchester United. Giggs made his first appearance for the club during the 1990–91 season and has been a regular player since the 1991–92 season. He established himself as a left winger during the 1990s, and continuing in this position well into the 2000s, though he has been increasingly used in a deeper playmaking role in his latter years.
Giggs is the most decorated player in English football history. He also holds the club record for competitive appearances. During his time at United, he has won 12 Premier League winner's medals, four FA Cup winner's medals, three League Cup winner's medals and two Champions League winner's medals. He has two runner-up medals from the Champions League, three FA Cup finals and two League Cup finals, as well as being part of the team five times when it finished second in the Premier League. In recent years, Giggs has captained the team on numerous occasions, particularly in the 2007–08 season when regular captain Gary Neville was ruled out with various injuries.
Giggs has a number of personal achievements. He was the first player in history to win two consecutive PFA Young Player of the Year awards (1992 and 1993), though he did not win the PFA Player of the Year award until 2009. He is the only player to have played and scored in every season of the Premier League and he also holds the longest run of successive scoring seasons in UEFA Champions League history (11). He has been elected into the PFA Team of the Century in 2007, the Premier League Team of the Decade, in 2003, as well as the FA Cup Team of the Century. Giggs holds the record for the most assists in Premier League history, with 271. 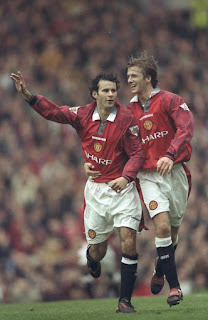 At international level, Giggs played for the Welsh national team prior to his retirement from international football on 2 June 2007, and was once the youngest player to ever represent his country.
In addition to the many honours Giggs has received within football such as being named in the Football League 100 Legends (the last active player in the list), he was appointed an OBE in the Queen's 2007 Birthday Honours List, and was inducted into the English Football Hall of Fame in 2005, for his services to English Football. He was named as BBC Sports Personality of the Year in 2009. On 31 January 2011, Giggs was named Manchester United's greatest ever player by a worldwide poll conducted by United's official magazine and website. On 10 October 2011, Giggs was honoured with the 2011 Golden Foot Award.
Early Years
Born as Ryan Joseph Wilson (he later adopted his mother's maiden name as his professional surname) at St David's Hospital in Canton, Cardiff, to Danny Wilson, at the time a rugby union player for Cardiff RFC who would go on to become a Wales international representative in rugby league, and Lynne Giggs (now Lynne Johnson). As a child Giggs grew up in Ely, a suburb of western Cardiff. His younger brother, Rhodri, manages non-league Salford City. 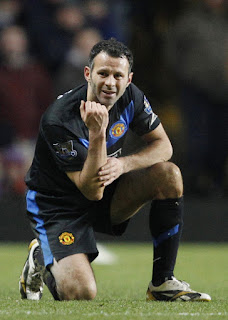 He spent much time with his mother's parents and playing football on the roads outside their house in Pentrebane. In 1980, when Giggs was six years old, his father switched rugby codes and signed for Swinton RLFC, forcing the whole family to move north to Swinton, a town in Salford, Greater Manchester. The move was a traumatic one, as Giggs was very close to his grandparents in Cardiff, but he would often return there with his family at weekends or on school holidays. Giggs is mixed race – his paternal grandfather is from Sierra Leone – and has spoken of the racism he faced as a child.
After moving to Salford, Giggs appeared for the local team, Deans FC, who were coached by Manchester City scout Dennis Schofield. Schofield recommended Giggs to Manchester City, and he was signed up to their School of Excellence. Meanwhile, Giggs continued to play for Salford Boys, who went on to reach the final of the Granada Schools Cup competition at Anfield in 1987. Giggs captained the Salford team to victory over their Blackburn counterparts, and the trophy was presented to him by Liverpool chief scout Ron Yeats. 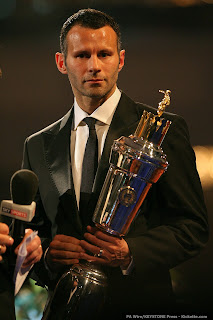 While playing for Deans, Giggs was observed regularly by local newsagent and Old Trafford steward Harold Wood. Wood spoke personally to Alex Ferguson who sent a scout, and Giggs was eventually offered a trial over the 1986 Christmas period. Giggs played in a match for Salford Boys against a United Under-15s side at The Cliff and scored a hat trick, with Ferguson watching from his office window. On 29 November 1987 (his 14th birthday), Ferguson turned up at Giggs's house with United scout Joe Brown and offered him two years on associate schoolboy forms. They offered to waive YTS forms, and persuaded Giggs to sign by offering the opportunity to turn professional in three years. Using the name Ryan Wilson, Giggs captained England at schoolboy level, playing at Wembley Stadium against Germany in 1989. He changed his surname at the age of 16, when his mother remarried. His parents had separated two years earlier.
Records
* Has won a record 12 top division English league titles as a player, and only Manchester United player to have winner's medals from all 12 Premier League title wins.
* Most Premier League appearances for a player, with 582.
* Most Premier League assists (accurate records are only available from 2002 onwards).
* Only player to have played and scored in every Premier League campaign.
* Only player to have scored in sixteen different Champions League tournaments. (Includes eleven consecutive tournaments, 1996–97 to 2006–07; only Raúl has a better record with 14.)
* Most goals by a British player in the Champions League/European Cup proper history, and 14th overall (not including preliminary rounds).
* Most appearances by a Manchester United player.
* First player to score 100 Premier League goals for Manchester United.
* Second midfielder to have scored 100 goals in the Premier League for a single club (first being Matt Le Tissier).
* One of four Manchester United players to win two Champions League Medals (others are Paul Scholes, Gary Neville and Wes Brown).
* Oldest (37 years, 289 days) player to score in the Champions League, when he scored against Benfica on 14 September 2011.
* One of two Manchester United Players to win at least 10 Top division medals (the other one is Paul Scholes.)
Endorsements and public image 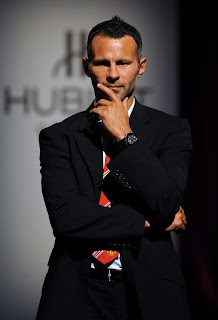 Giggs has been featured in adverts for Reebok, Sovil Titus, Citizen Watches, Givenchy, Fuji, Patek Phillipe, Quorn Burgers, ITV Digital and Celcom.
According to an article by BBC Sport: "In the early 1990s, Giggs was David Beckham before Beckham was even holding down a place in the United first team. If you put his face on the cover of a football magazine, it guaranteed you the biggest sales of the year. Why? Men would buy it to read about 'the new Best' and girls bought it because they wanted his face all over their bedroom walls. Giggs had the million-pound boot deal (Reebok), the lucrative sponsorship deals in the Far East (Fuji) and the celebrity girlfriends (Dani Behr, Davinia Taylor) at a time when Beckham was being sent on loan to Preston North End."
Giggs has said that he deliberately shunned the media fuss. "Nothing could have prepared me for the limelight I was thrust into at 17," said Giggs. "I was in newspapers, magazines, on TV, and everyone in the street knew me. 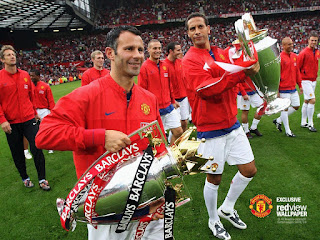 It was strange for me and I dealt with it by trying not to create a fuss. I've just tried to keep it that way ever since." At the height of his celebrity, Giggs' relationships caused him to change his media approach. Giggs has spoken about this decided shift away from publicity —- a route he seemed destined to take as celebrity pin up —- as occurring sometime in the mid 1990s. "The high-profile relationship I had with the TV presenter Dani Behr was the turning point for me", said Giggs. "Before I knew it, we were being photographed outside my house and cameramen followed us everywhere. It was very uncomfortable. At that point I decided the celebrity lifestyle wasn't for me. Around that time I felt my commercial work was affecting my work, too. I thought 'no, football is my bread and butter. It has to, and always will, come first'", he told the Daily Mirror.
From : www.wikipedia.org
Posted by Robbyen at 8:37 AM