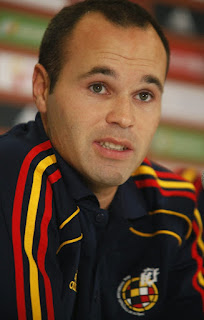 Andrés Iniesta Luján (born 11 May 1984) is a Spanish football player. He currently plays as a central midfielder for La Liga club FC Barcelona, and the Spanish national team.
Iniesta came through La Masia, the Barcelona youth academy, and impressed from an early age. He made his first-team debut in 2002, aged 18. He began playing regularly during the 2004–05 season, and has remained in the side ever since. He was an integral part of the sextuple-winning Barcelona side in 2009, the only time which a club has achieved six titles in a year.
Iniesta played for Spain at Under-16, Under-19 and Under-21 levels, before making his international debut in 2006. He was selected for the 2006 FIFA World Cup, playing one game, as Spain went out in the second round. He helped Spain qualify for Euro 2008, and played an important role in the side as they went on to win the competition, playing every game and being selected in the UEFA Team of the Tournament. Iniesta was selected for the 2010 FIFA World Cup and was a key member of the victorious Spanish side; he scored the winning goal in the final against the Netherlands, also being named Man of the Match, and was selected in the tournament's All-Star Team. He was also the Man of the Match for two other World Cup games.
Style of play 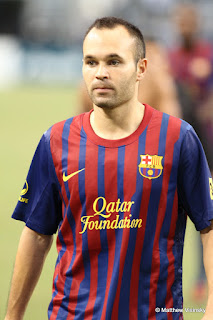 Like fellow La Masia graduate Cesc Fàbregas, Iniesta originally started as a defensive midfielder but his balance, ball control and agility allied with his skill on the ball saw him make progress as an attacking midfielder. Beyond his raw talent that was spotted at a young age by FC Barcelona's scouts, it was his great versatility, work ethic and inventiveness that allowed him to stake a claim on a first-team place at the age of 18. Vicente del Bosque described him as "the complete footballer. He can attack and defend, he creates and scores," and Frank Rijkaard said "I played him as a false winger, central midfielder, deep midfielder and just behind the striker and he was always excellent." He was used initially as a wide-forward in the absence of Juan Roman Riquelme and Ronaldinho by Louis van Gaal and Rijkaard respectively, but made his name as a world-class player in central midfield alongside or in lieu of Xavi, at both club and international level. As FIFA.com says, "It is in this position that his direct style and quick feet can be used to full effect, with the ball seeming glued to his toes as he races into threatening positions. Iniesta is a player known for his passing, dribbling, vision and movement." Much like other Barcelona youth products such as Guardiola, Xavi and Iván de la Peña, Iniesta relies on exceptional creative passing, intuition and inventiveness to control the midfield and dictate the ebb and flow of play. 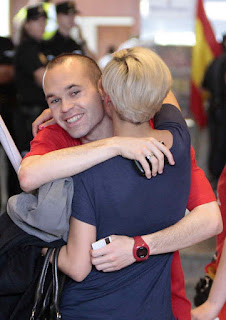 Iniesta has been praised for his understanding and interplay with Xavi; former Barcelona teammate Giovanni van Bronckhorst saying "They have a special relationship, they always have, they just seem to know where the other one is". During his maturation as a player, he has gained a reputation for playing a part in important goals for club and country, specifically playing a leading role in the 2006, 2009 and 2011 UEFA Champions League finals, as well as the 2010 FIFA World Cup Final and 2008–09 UEFA Champions League and Euro 2008 semi-finals.
His willingness to play anywhere on the pitch has earned him the sobriquet El Ilusionista (The Illusionist), El Cerebro (The Brain), El Anti-Galáctico (a pun on Real Madrid players' nickname Los Galácticos), El Caballero Pálido (The Pale Knight) and most recently Don Andrés from the Spanish press.
Personal life
Since 2008, Iniesta has dated Anna Ortiz, and in September 2010 he confirmed that she was pregnant with his child. On April 3, 2011 she gave birth to their daughter Valeria.
From : www.wikipedia.org
Posted by Robbyen at 5:59 AM