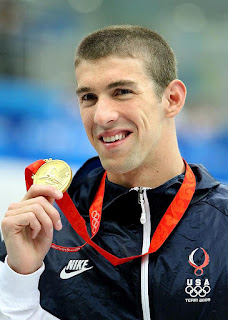 Michael Fred Phelps (born June 30, 1985) is an American swimmer who has, overall, won 16 Olympic medals—six gold and two bronze at Athens in 2004, and eight gold at Beijing in 2008, becoming the most successful athlete at both of these Olympic Games editions. In doing so he has twice equaled the record eight medals of any type at a single Olympics achieved by Soviet gymnast Alexander Dityatin at the 1980 Moscow Summer Games. His five golds in individual events tied the single Games record set by compatriot Eric Heiden in the 1980 Winter Olympics and equaled by Vitaly Scherbo at the 1992 Summer Games. Phelps holds the record for the most gold medals won in a single Olympics; his eight at the 2008 Beijing Games surpassed American swimmer Mark Spitz's seven-gold performance at Munich in 1972. Phelps' Olympic medal total is second only to the 18 Soviet gymnast Larisa Latynina won over three Olympics, including nine gold. Furthermore, he holds the all-time record for most individual gold Olympic medals, at nine. 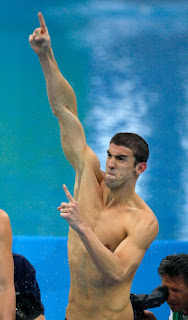 Phelps's international titles and record breaking performances have earned him the World Swimmer of the Year Award six times and American Swimmer of the Year Award eight times. He has won a total of sixty-six medals in major international competition, fifty-four gold, nine silver, and three bronze spanning the Olympics, the World, and the Pan Pacific Championships. His unprecedented Olympic success in 2008 earned Phelps Sports Illustrated magazine's Sportsman of the Year award.
After the 2008 Summer Olympics, Phelps started the Michael Phelps Foundation, which focuses on growing the sport of swimming and promoting healthier lifestyles. As a participant in the US Anti-Doping Agency's "Project Believe" program, Phelps is regularly tested to ensure that his system is clean of performance-enhancing drugs.
Early life
Phelps was born and raised in the Rodgers Forge neighborhood of Towson, Maryland, located just outside of Baltimore City. His father, Fred, was a football player in high school and almost made the team for the Washington Redskins. His mother Deborah "Debbie" Phelps is a middle school principal. Phelps began swimming at the age of seven, partly because of the influence of his sisters and partly to provide him with an outlet for his energy. 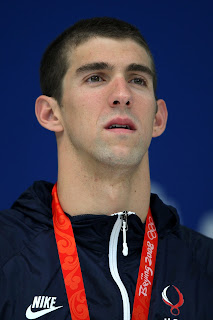 When Phelps was in the sixth grade, he was diagnosed with attention-deficit hyperactivity disorder (ADHD). Phelps trained at the North Baltimore Aquatic Club under coach Bob Bowman and excelled as a swimmer. By the age of 10, he held a national record for his age group. More age group records followed, and Phelps' rapid improvement culminated in his qualifying for the 2000 Summer Olympics at the age of 15 and becoming the youngest male to make a U.S. Olympic swim team in 68 years. While he did not win a medal, he did make the finals and finished fifth in the 200 m butterfly.
At the World Championship Trials for the 2001 World Aquatics Championships, on 22 July, Phelps broke the world record in the 200 m butterfly to become, at 15 years and 9 months, the youngest man ever to set a swimming world record, breaking the record previously held by Ian Thorpe when he lowered the 400 m freestyle world record at 16 years, 10 months. At the World Championships in Fukuoka, Phelps broke his own world record in the 200 m butterfly en route to becoming a world champion for the first time.
From : www.wikipedia.org
Posted by Robbyen at 7:12 AM