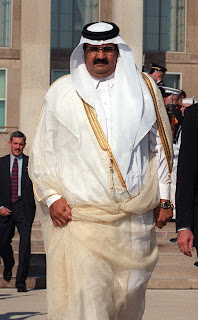 Sheikh Hamad bin Khalifa Al Thani (Arabic: الشيخ حمد بن خليفة ال ثاني‎; born on 1 January 1952) is the ruling Emir of the State of Qatar since 1995.
Sheikh Hamad was the appointed Heir Apparent of Qatar between 1977 and 1995 and at the same time Minister of Defense. In the early 1980s he led the Supreme Planning Council, which sets the Qatar's basic economic and social policies. Starting in 1992, Hamad had a growing responsibility for the day-to-day running of the country, including the development of Qatar's oil and natural gas resources. On 27 June 1995, after deposing his father in a palace coup, Sheikh Hamad became Emir of Qatar and was crowned on 20 June 2000.
Early life
Sheikh Hamad began his education in Qatar and later attended Sandhurst Military Academy in England. Upon his graduation in 1971, he was commissioned as a Lieutenant Colonel in the Qatari armed forces and commanded the 1st Mobile Battalion, which has since been designated the "Hamad Mobile Battalion" in his honor.
Hamad was later promoted to the rank of Major General and appointed Commander in Chief of the Qatari Armed Forces. He oversaw an extensive program to modernize Qatar's military, increasing manpower, creating new units, updating weaponry, and improving training. He is also promoting Islamist parties in Libya, Syria and Palestine.
As Emir 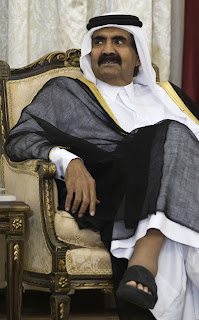 In the early 1980s, Hamad led the Supreme Planning Council, which sets the Qatar's basic economic and social policies. Starting in 1992, Hamad's father handed over responsibility for the day-to-day running of the country, including the development of Qatar's oil and natural gas resources. With the support of his family, Sheikh Hamad took control of the country in 1995 while his father was abroad.
The Emir is considered to be progressive among Muslim leaders. In a break with the traditional role, his second wife Sheikha Mozah bint Nasser Al Missned has been a visible advocate for education and children's causes.
A sportsman and an accomplished diver, Hamad has played an active role in promoting and developing athletics in Qatar. His activism has enhanced the country's involvement and performance in a number of international competitions, including: winning an Olympic medal in track and field; hosting a wide variety of international sporting events such as the 15th Asian Games, GCC, Asian and World Youth soccer championships; and initiating the Qatar Open Tennis Championship which has grown to become one of two premier tennis competitions in the Middle East. 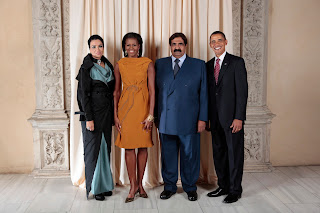 Under his rule the Quatari government helped to fund the Al Jazeera news network, funding it by an emiri decree. In an analysis of Al Jazeera, Hugh Miles claimed that diplomats from other countries know that the Emir is the real power behind Al Jazeera but he also quotes a network spokesman denying 'countless times' this accusation, adding that many independent news sources also have subsidies from their respective governments without this implying editorial dabbling and explaining that trying to coerce the kind of journalists Al Jazeera has would be like trying to 'herd cats'. Sheik Hamad is a distant cousin of the network chairman, Hamad bin Thamer Al Thani, who was previously Minister of Information in the Emir Al-Thani government. Following the initial US$137 million grant from Emir Al-Thani, Al Jazeera had aimed to become self-sufficient through advertising by 2001, but when this failed to occur, the Emir agreed to several consecutive loans on a year-by-year basis (US$30 million in 2004, according to Arnaud de Borchgrave). 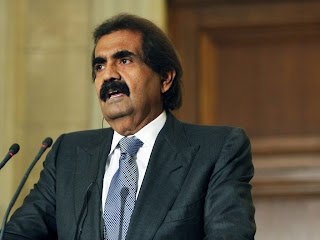 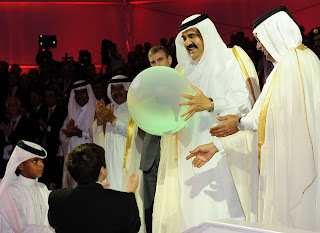 Media sources claimed that Sheikh Hamad bin Khalifa Al Thani made a bid for Manchester United on February 11, 2011. Qatari Holdings offered £1.6 billion to Malcolm Glazer, the current American owner of the club. This follows a series of endeavors by the Emir and other Qataris into the World Football community, following Qatar's successful bid for the 2022 World Cup, and the Qatar Foundation's recent £125m shirt deal with FC Barcelona. In mid-June 2011, rumours resurfaced that Qatari Holdings were preparing a £2 Billion takeover bid and that the funding that the club had been using for transfers since the start of June, was actually supplied by the Qataris and not the Glazer Family.
From : www.wikipedia.org
Posted by Robbyen at 8:14 AM