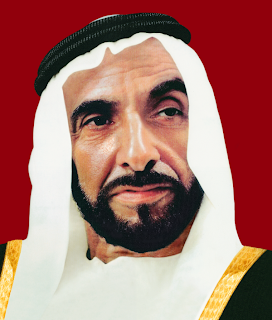 Born in 1918, Zayed bin Sultan al Nahyan was the son of the ruler of Abu Dhabi and raised as a nomadic Bedouin. He took over the country when his brother was deposed in a bloodless coup in 1969. After the formation of the United Arab Emirates, Zayed was made president of its Supreme Council, holding that position until his death in 2004.

Profile
President of the United Arab Emirates (1971- ), raised as a desert nomad. He was governor of the province of Abu Dhabi, one of seven Trucial States on the S shores of the Persian Gulf and the Gulf of Oman, which were under British protection, until in 1969 he deposed his brother, Sheikh Shakhbut, and became emir. When the States decided to federate as the United Arab Emirates in 1971, he became president of its Supreme Council, and was re-elected in 1986, 1991, 1996, and 2001 by the Federal Supreme Council, which consists of the seven emirate rulers.
From : www.biography.com
Posted by Robbyen at 8:58 AM