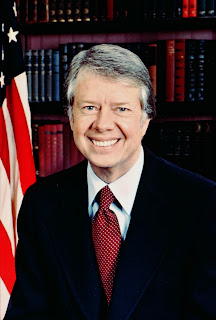 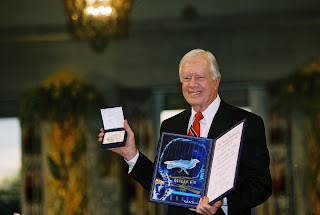 Despite a largely unsuccessful one-term presidency, Jimmy Carter later rehabilitated his reputation through his humanitarian efforts after leaving the White House. He is now widely considered one of the greatest ex-presidents in American history. He has worked extensively with Habitat for Humanity and founded the Carter Presidential Center to promote human rights and alleviate suffering across the globe. In particular, Carter has worked effectively as an ex-president to develop community-based health care systems in Africa and Latin America, to oversee elections in fledgling democracies and to promote peace in the Middle East. In 2002, Jimmy Carter received the Nobel Peace Prize "for his decades of untiring effort to find peaceful solutions to international conflicts, to advance democracy and human rights, and to promote economic and social development." Carter has also written many books in the years since his presidency, including several memoirs, Our Endangered Values: America's Moral Crisis (2006) and Palestine: Peace Not Apartheid (2007).
Jimmy Carter will not go down in history as one of America's most effective presidents. However, because of his tireless work both before and since his presidency in support of equality, human rights and the alleviation of human suffering, Carter will go down as one of the nation's great social activists. Delivering his Nobel Lecture in 2002, Carter concluded with words that can be seen as both his life mission and his call to action for future generations. "The bond of our common humanity is stronger than the divisiveness of our fears and prejudices," he said. "God gives us the capacity for choice. We can choose to alleviate suffering. We can choose to work together for peace. We can make these changes – and we must."
From : www.biography.com
Posted by Robbyen at 7:50 AM