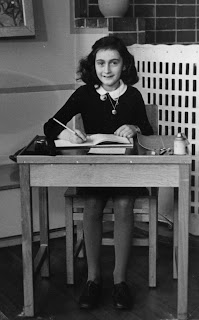 Anne Frank is one of the most famous Jewish victims of the Holocaust because of the diary she kept during her time in hiding before being captured by the Nazis. She was only 13 years old when she and her family went into hiding. The writings from the two years she spent in such close proximity to her family was discovered and published by her father, Otto Frank and continue to touch people today.
Early Life
Holocaust victim; famous diarist. Anne Frank was born Annelies Marie Frank on June 12, 1929, in Frankfurt, Germany. Her mother was Edith Frank, and her father, Otto Frank, was a lieutenant in the German Army during World War I who later became a businessman in Germany and the Netherlands. Frank also had a sister named Margot, three years her senior. The Franks were a typical upper middle-class German-Jewish family living in a quiet, religiously diverse neighborhood near the outskirts of Frankfurt. However, Frank was born on the eve of dramatic changes in German society that would soon disrupt her family's happy, tranquil life as well as the lives of all other German Jews.
Due in large part to the harsh sanctions imposed on Germany by the 1919 Treaty of Versailles that ended World War I, the German economy struggled terribly in the 1920s. During the late 1920s and early 1930s, the virulently anti-Semitic National German Socialist Workers Party (Nazi Party) led by Adolph Hitler became Germany's leading political force, winning control of the government in 1933. "I can remember that as early as 1932, groups of Storm Troopers came marching by, singing 'When Jewish blood splatters from the knife,'" Otto Frank recalled. When Hitler became Chancellor of Germany on January 20, 1933, the Frank family immediately realized that it was time to flee. Otto later said, "Though this did hurt me deeply, I realized that Germany was not the world, and I left my country forever."
The Franks moved to Amsterdam, the Netherlands, in the fall of 1933. Anne Frank described the circumstances of her family's emigration years later in her diary: "Because we're Jewish, my father immigrated to Holland in 1933, where he became the managing director of the Dutch Opekta Company, which manufactures products used in making jam." After years of enduring anti-Semitism in Germany, the Franks were relieved to once again enjoy freedom in their new hometown of Amsterdam. "In those days it was possible for us to start over and to feel free," Otto recalled. Anne Frank started at the Montessori School in 1934, and throughout the rest of the 1930s she lived a relatively happy and normal childhood. Frank had many friends, Dutch and German, Jewish and Christian, and she was a bright and inquisitive student.
Nazi Occupation
Then on September 1, 1939, Nazi Germany invaded Poland, igniting the global conflict that developed into World War II. On May 10, 1940, the German army invaded the Netherlands, defeating overmatched Dutch forces after just a few days of fighting. The Dutch surrendered on May 15, 1940, marking the beginning of the Nazi occupation of the Netherlands. As Frank later wrote in her diary, "After May 1940, the good times were few and far between; first there was the war, then the capitulation and then the arrival of the Germans, which is when the trouble started for the Jews." Beginning in October, the Nazi occupiers imposed anti-Jewish measures on the Netherlands. Jews were required to wear a yellow Star of David at all times and observe a strict curfew; they were also forbidden from owning businesses. Frank and her sister were forced to transfer to a segregated Jewish school. Otto Frank managed to keep control of his company by officially signing ownership over to two of his Christian associates, Jo Kleiman and Victor Kugler, while continuing to run the company from behind the scenes.
On June 12, 1942, Frank's parents gave her a red checkered diary for her 13th birthday. She wrote her first entry, addressed to an imaginary friend named Kitty, that same day: "I hope I will be able to confide everything to you, as I have never been able to confide in anyone, and I hope you will be a great source of comfort and support." Weeks later, on July 5, 1942, Margot received an official summons to report to a Nazi work camp in Germany. The very next day, the family went into hiding in makeshift quarters in an empty space at the back of Otto Frank's company building, which they referred to as the Secret Annex. They were accompanied in hiding by Otto's business partner Hermann van Pels as well as his wife, Auguste, and son, Peter. Otto's employees Kleiman and Kugler, as well as Jan and Miep Gies and Bep Voskuijl, provided food and information about the outside world. 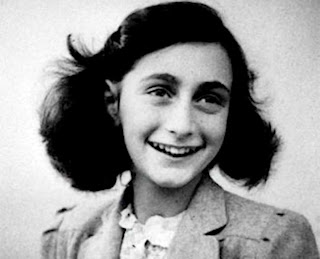 The families spent two years in hiding without ever once stepping outside the dark, damp, sequestered portion of the building. To pass the time, Frank wrote extensive daily entries in her diary. Some betrayed the depth of despair into which she occasionally sunk during day after day of confinement. "I've reached the point where I hardly care whether I live or die," she wrote on February 3, 1944. "The world will keep on turning without me, and I can't do anything to change events anyway." However, the act of writing allowed Frank to maintain her sanity and her spirits. "When I write, I can shake off all my cares," she wrote on April 5, 1944. In addition to her diary, Frank also filled a notebook with quotes from her favorite authors, original stories and the beginnings of a novel about her time in the Secret Annex. Her writings reveal a teenage girl with creativity, wisdom, depth of emotion and rhetorical power far beyond her years.
Captured by the Nazis
On August 4, 1944, a German secret police officer accompanied by four Dutch Nazis stormed into the Secret Annex and arrested everyone hiding there. They had been betrayed by an anonymous tip; the identity of their betrayer remains unknown till this day. The residents of the Secret Annex were shipped off to Camp Westerbork, a concentration camp in the northeastern Netherlands, and arrived by passenger train on August 8. They were transferred to the Auschwitz death camp in Poland in the middle of the night on September 3, 1944. Upon arrival at Auschwitz, the men and women were separated; it was the last time Otto Frank ever saw his wife or daughters.
After several months of hard labor hauling heavy stones and grass mats, Anne and Margot were again transferred during the winter to the Bergen-Belsen concentration camp in Germany. Their mother was not allowed to go with them, and Edith Frank fell ill and died at Auschwitz shortly thereafter on January 6, 1945. At Bergen-Belsen, food was short, sanitation was awful and disease ran rampant. Frank and her sister both came down with typhus in the early spring and died within a day of each other sometime in early March, only a few weeks before Russian soldiers liberated the camp. Anne Frank was just 15 years old at the time of her death, one of more than 1 million Jewish children who died in the Holocaust.
Otto Frank was the only member of his immediate family to survive. At the end of the war, he returned home to Amsterdam, searching desperately for news of his family. On July 18, 1945, he met two sisters who had been with Anne and Margot at Bergen-Belsen and passed on the tragic news of their deaths. Nevertheless, what Otto did find upon his return to Amsterdam was Anne Frank's diary, which had been saved by Miep Gries. He eventually gathered the strength to read it and was awestruck by what he discovered. "There was revealed a completely different Anne to the child that I had lost," wrote Otto in a letter to his mother. "I had no idea of the depths of her thoughts and feelings. He sought to have selections from his daughter's diary published as a book, and The Secret Annex: Diary Letters from June 14, 1942 to August 1, 1944 was published on June 25, 1947. "If she had been here, Anne would have been so proud," he said. Anne Frank: The Diary of a Young Girl, as it is typically called in English, has since been published in countless languages and editions. The diary has also been adapted for the stage and screen many times over all across the world. It remains one of the most moving and widelyread firsthand accounts of the Jewish experience during the Holocaust.
Anne Frank's diary endures not only because of the remarkable events she described, but also because of her extraordinary gifts as a storyteller and her indefatigable spirit through even the most horrific of circumstances. For all its passages of despair, Frank's diary is essentially a story of faith, hope and love in the face of hate. "It's utterly impossible for me to build my life on a foundation of chaos, suffering and death," she wrote on July 15, 1944. "I see the world being slowly transformed into a wilderness; I hear the approaching thunder that, one day, will destroy us too. I feel the suffering of millions. And yet, when I look up at the sky, I somehow feel that everything will change for the better, that this cruelty too shall end, that peace and tranquility will return once more."
From : www.biography.com
Posted by Robbyen at 8:41 AM