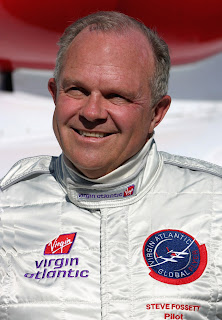 Steve Fossett was a U.S. businessman who made his fortune in finance with his two brokerage companies. He became famous for pouring his incredible wealth into some 100 attempts and successes in setting records in sailing, ballooning, gliders, jets, boats, and other exploits. He was the first person to fly solo nonstop around the world in a balloon. He died in the Sierras in a plane crash in 2007.
A Successful Businessman and Adventurer
Adventurer. Fossett was born James Stephen Fossett on April 22, 1944, in Jackson, Tennessee. He grew up in Garden Grove, California. Fossett graduated from Stanford University and picked up a master's degree from Washington University in St. Louis.
He made his fortune trading futures and options on Chicago markets with his brokerage companies Lakota Trading, Inc. and Marathon Securities, Inc. He became famous for pouring his fabulous wealth into more than 100 attempts and successes in setting records in sailing, ballooning, gliders, jets, boats and other daredevil exploits.
He climbed some of the world's tallest peaks, including the Matterhorn in Switzerland and Mount Kilimanjaro in Tanzania. He also swam the English Channel in 1985. He also placed 47th in the Iditarod dog sled race in 1992 and participated in the 24 Hours of Le Mans car race in 1996.
Record-Breaking Feats
His round-the-world balloon attempts in August 1998 and August 2001 were the longest solo flights in a balloon for distance and duration, and, in fact, by any type of aircraft. He made the first balloon crossings of Asia, Africa, Europe and South America, as well as the South Atlantic, South Pacific and Indian Oceans. He also made the first solo flight across the Pacific Ocean.
In July 2002, Fossett was the first person to circumnavigate the globe alone in an unmotorized balloon. The Spirit of Freedom balloon launched from Northam, Australia, and the journey lasted 13 1/2 days. It was Fossett's sixth attempt.
In 2005, he became the first person to fly a plane solo around the world without refueling in 67 hours. He and a co-pilot also claim to have set a world glider altitude record of 50,671 feet during a flight in August 2006 over the Andes Mountains.
He also set round-the-world records for medium weight airplanes, as well as U.S. trans-continental records for non-military aircraft.
In addition, Fossett is the world's most accomplished speed sailor, setting 23 official world records and nine distance race records.
He was inducted into the National Aviation Hall of Fame in July 2007, telling a crowd gathered at the Dayton Convention Center in Ohio that he would continue flying."I'm hoping you didn't give me this award because you think my career is complete, because I'm not done," Fossett said.
His Disappearance and Death
But in September of 2007, Fossett disappeared during a pleasure flight over the Sierra Nevadas. He did not have a parachute, nor did he take a watch that had a transponder and could have sent out a distress signal. There was a transponder aboard but no signal was received.
Fossett's disappearance prompted a search that ultimately included thousands of volunteers, hundreds of officials and dozens of aircraft poring over an area more than twice the size of New Jersey. The search was eventually called off.
On November 26, 2007, Fossett's wife asked a court to declare her husband legally dead. Her lawyer said while the request was painful for Peggy Fossett, it was necessary to begin to resolve her husband's vast estate, which surpasses "eight figures in liquid assets, various entities and real estate." A Chicago probate court judge declared Fossett dead on February 15, 2008.
Searchers found human remains at the crash site of his plane on October 3, 2008. The craft appeared to have hit the mountainside head-on, authorities said. Most of the plane's fuselage disintegrated on impact, and the engine was found several hundred feet away at an elevation of 9,700 feet. "It was a hard-impact crash," said Jeff Page, emergency management coordinator for Lyon County, Nevada, who assisted the search. "He would've died instantly."
From : www.biography.com
Posted by Robbyen at 8:18 AM