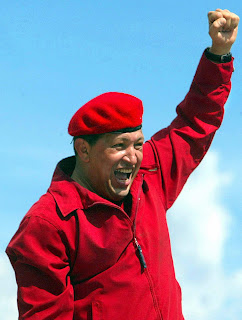 The president of Venezuela, Hugo Chávez, was born on July 28, 1954 in Sabaneta, Venezuela. He attended the military academy and served as a officer in the army. He participated in an effort to overthrow the government and spent two years in prison.
Failed Coup Attempt
Politician, president of Venezuela. Born Hugo Rafael Chávez Frías on July 28, 1954, in Sabaneta, Venezuela. The son of schoolteachers, he is known for his reform efforts and his strong opinions. Chávez attended the Venezuelan military academy and graduated in 1975 with a degree in military sciences and arts. He went on to serve as an officer in an army paratrooper unit.
In 1992, Chávez, along with other disenchanted members of the military, attempted to overthrow the government of Carlos Andrés Peréz. The coup failed and Chávez spent two years in prison before being pardoned. He then started the Movement of the Fifth Republic, a revolutionary political party. Chávez ran for president in 1998, campaigning against government corruption and promising economic reforms.
Elected President 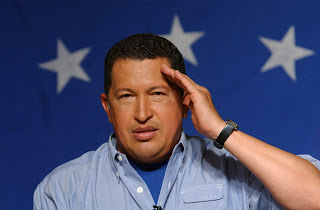 After taking office in 1999, Chávez set out to change the Venezuelan constitution, changing the powers of congress and the judicial system. As a part of the new constitution, the name of the country was changed to the Bolivarian Republic of Venezuela.
As president, Chávez has encountered some challenges both at home and aboard. His efforts to tighten his hold on the state-run oil company in 2002 stirred up controversy and led to numerous protests. Chávez found himself removed from power briefly in April 2002 by military leaders. The protests continued after his return to power and led to a referendum on whether Chávez should remain as president. The referendum vote was held in August 2004 and a majority of the voters decided to let Chavez complete his term in office.
Hostility Towards the U.S.
Throughout his presidency, Chávez has been outspoken, refusing to hold back on any of his opinions or his criticisms. He has insulted oil executives, church officials, and other world leaders. He has particular hostility for the United States, which he believes was responsible for the failed 2002 coup against him. Chávez also objected to the war in Iraq and thinks that the United States has abused its powers. He considers President George W. Bush to be an evil imperialist. 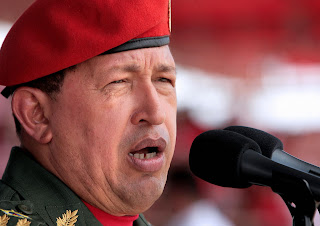 Relations between the United States and Venezuela have been strained for some time. Since taking office, Chávez has sold oil to Cuba - a longtime adversary of the United States - and resisted U.S. plans to stop narcotics trafficking in nearby Colombia. He also helped guerrilla forces in neighboring countries. Over the years, Chávez has threatened to stop supplying oil to the United States if there is another attempt to remove him from power. He did, however, donate heating oil to help the victims of Hurricane Katrina and Hurricane Rita, which destroyed numerous fuel processing facilities.
International Collaboration
No matter the state of Venezuela's relationship with the United States, Chávez has leveraged his country's oil resources to form connections to other nations, such as China and Angola. In 2006 he helped create the Bolivarian Alternative for the Americas, a socialist free-trade organization. Fidel Castro, president of Cuba, and Evo Morales, president of Bolivia. Chávez is also an active member of the Non-Aligned Movement, a group of more than 100 countries, including Cuba, Iran, and several African nations.
Away from the political arena, Chávez is a fan of baseball, having been an excellent player growing up. He and his wife, María Isabel Rodriguez, have five children.
From : www.biogrpahy.com
Posted by Robbyen at 10:38 PM