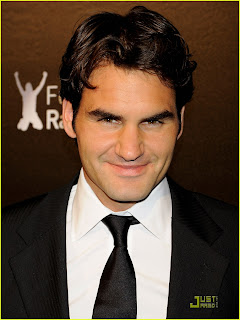 Born August 8, 1981, Roger Federer was among the top 3 junior tennis players in Switzerland by the age of 11. He joined the junior tournament circuit, becoming the national junior champion at age 14. Federer turned pro in 1998.
Profile
Athlete. Born on August 8, 1981, in Basel, Switzerland. His parents, Robert Federer and Lynette Du Rand, met while on a business trip for a pharmaceutical company where they both worked.
Federer took an interest in sports at an early age, playing tennis and soccer at the age of 8. The young athlete excelled at athletics, and by the age of 11 he was among the top 3 junior tennis players in Switzerland. At the age of 12, he decided to quit other sports and focus all his efforts on tennis, which he felt he excelled at more naturally. By the age of 14, he was fully immersed in the game, playing 2-3 tournaments per month, and practicing 6 hours of the game a week along with up to 3 hours of conditioning. To perfect his technique, he often imitated his idols, Boris Becker and Stefan Edberg.
At 14, he became the national junior champion in Switzerland, and was chosen to train at the Swiss National Tennis Center in Ecublens, and had his his first sponsorship by the age of 16. He joined the International Tennis Federation junior tennis circuit in July 1996. In 1998, shortly before he turned pro Federer won the junior Wimbledon title and the Orange Bowl. He was recognized as the ITF World Junior Tennis champion of the year. 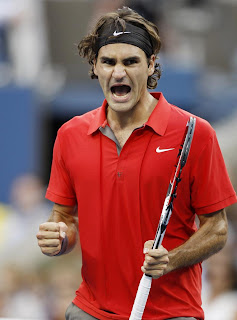 In 1998, he won the Wimbledon boys' singles and doubles titles in 1998 and turned professional later that year. At Wimbledon 2001 he caused a sensation by knocking out reigning singles champion Pete Sampras in the fourth round. In 2003, following a successful season on grass, Federer became the first Swiss man to win a Grand Slam title when he became Wimbledon singles champion.
At the beginning of 2004, Federer had a world ranking of number 2, and during that year won the Australian Open, the U.S. Open, the ATP Masters, and retained the Wimbledon singles title. He was ranked number 1 at the start of 2005 and his successes that year include the Wimbledon singles title for a third successive year, and the U.S. Open.
Federer held on to his number 1 ranking at the start of 2006, winning the Australian Open, his fourth successive Wimbledon singles title, and his third successive U.S. Open. Continuing to dominate the sport, the right-handed champion won the singles title at Wimbledon and the U.S. Open again as well as the Australian Open in 2007. Currently ranked No. 1 on the ATP Tour, Federer has been named Laureus World Sportsman of the Year Award three times??in 2005, 2006, and 2007.
Federer was in the finals for a sixth U.S. Open win, and with the option of victory came the possibility of breaking several records. Federer lost, however, to Juan Martin del Potro.
When he's not on tour, Federer lives in Oberwil, Switzerland. Outside of tennis, he established the Roger Federer Foundation to support projects that help children learn worldwide and that promote sports in his native Switzerland.
From : www.biography.com
Posted by Robbyen at 7:20 AM