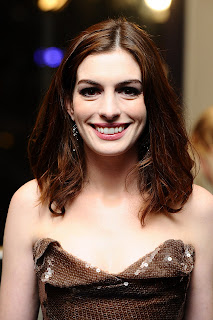 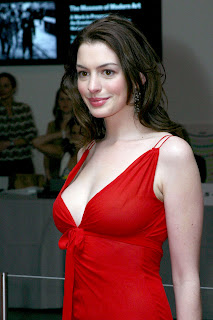 For her next role, Hathaway took on an English accent to play literary legend Jane Austen. The historical romance, Becoming Jane (2007), focuses on the relationship between Austen and a young Irish lawyer, played by James McAvoy. Hathaway demonstrated her range on this and other films, including a big-screen adaptation of the hit television comedy, Get Smart (2008) opposite Steve Carell, as well as the thriller Passengers (2008). Her most recent film role, as Kym in the movie Rachel Getting Married (2008), earned her an Academy Award nod for Best Actress.
Hathaway returned to lighter fare with the romantic comedy Bride Wars in 2009, starring opposite Kate Hudson. The film received a lukewarm reception from movie goers, earning more than $58 million at the box office. The following year, Hathaway had a supporting role in the ensemble comedy Valentine's Day, which also featured Jennifer Garner, Topher Grace, Ashton Kutcher, and Jessica Biel.
Tackling a famous literary character in her next project, Hathaway played the White Queen in Tim Burton's reimagining of the famous children's tale Alice in Wonderland. The film, starring Mia Wasikowska as Alice and Johnny Depp as the Mad Hatter, proved to be a huge commercial and critical success. Hathaway will also appear in the upcoming satire of the pharmaceutical industry, Love and Other Drugs, with Jake Gyllenhaal.
Personal Life
Hathaway dated Italian real estate developer Raffaello Follieri. The couple split in June of 2008, after law officials accused Follieri of swindling investors out of millions and falsely claiming the Vatican appointed him to manage its financial affairs. She is currently linked to actor Adam Shulman.
In addition to acting, Hathaway supports several charities, including the Step Up Women's Network and the Lollipop Theater Network. She currently lives in New York City.
From : www.biography.com
Posted by Robbyen at 8:07 PM