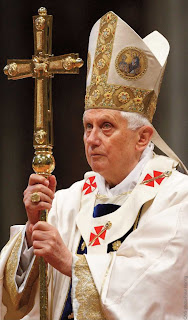 Pope Benedict XVI was born in Germany and grew up under war reparations from World War I and as the Nazi regime was gaining power. He was briefly a member of the Hitler Youth in his early teens, after membership became mandatory in 1941. He turned to theological studies after the war, helping found the influential journal Communio. He was elevated to the papacy in 2005.
Early Life
Born Joseph Ratzinger on April 16, 1927, in Marktl am Inn, Bavaria, Germany, the youngest of three children. His father was a policeman and his mother a hotel cook (before she married). His family moved frequently among villages in rural Bavaria, a deeply Roman Catholic region in Germany, as the Nazis strengthened their stranglehold on Germany in the 1930s. His father was a determined anti-Nazi, Ratzinger wrote. Unemployment was rife," he wrote in his memoir, Milestones. "War reparations (from World War I) weighed heavily on the German economy. Battles among the political parties set people against one another."
As a defense against the Nazi regime, Ratzinger threw himself into the Roman Catholic Church, "a citadel of truth and righteousness against the realm of atheism and deceit," he wrote.
Ratzinger entered preparatory seminary in 1939. But he could not avoid the realities of the day. Ratzinger was briefly a member of the Hitler Youth in his early teens, after membership became mandatory in 1941.
Military Service
In 1943, he and fellow seminarians were drafted into the anti-aircraft corps. He has said his unit was attacked by Allied forces that year, but he did not take part in that battle because a finger infection had kept him from learning to shoot.
After about a year in the antiaircraft unit, Ratzinger was drafted into the regular military. He told Time magazine in 1993 that while stationed near Hungary, he saw Hungarian Jews being sent to death camps.
Ratzinger was sent home and then called up again before deserting in late April 1945. He was captured by American soldiers and held as a prisoner of war for several months.
Ratzinger returned to seminary at the University of Munich in the fall of 1945 and was ordained a priest in 1951. Two years later, he earned his doctorate at the University of Munich. He earned his teaching licentiate in 1957 and became a professor of Freising College in 1958, teaching dogma and fundamental theology. 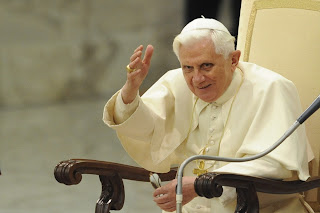 Ratzinger became a professor at the University of Bonn in 1959. Later, he moved to the University of Muenster (1963-1966) and took a chair in dogmatic theology at the University of Tübingen. Alienated by the student protests at Tübingen, he returned to Bavaria, to the University of Regensburg.
Promotion Within the Church
At the Second Vatican Council (1962-1965), Ratzinger served as chief theological expert to Cardinal Joseph Frings of Cologne, Germany. He was viewed as a reformer during this time.
In 1972, Ratzinger helped found the theological journal Communio, which became one of the most important journals of Catholic thought.
In March 1977, he was named archbishop of Munich and Freising and, three months later, was named a Cardinal by Pope Paul VI.
In 1981, Pope John Paul II named Ratzinger prefect of the Congregation for the Doctrine of the Faith. In 1998, he became Vice Dean of the College of Cardinals and was elected Dean in 2002. Ratzinger defended and reaffirmed Catholic doctrine, including teaching on topics such as birth control, homosexuality and inter-religious dialogue.
Papacy
Ratzinger was elevated to the papacy on April 19, 2005, upon the death of Pope John Paul II and celebrated his Papal Inauguration Mass five days later. Known for his rigid views on Catholicism, he has sought a more inclusive image as pope.
Benedict made his first visit as pope to the United States in 2008, where he spoke out against clerical sexual abuse and delivered an address at the United Nations. That same year, to foster relations and understanding between religions, Benedict addressed the first Catholic-Muslim Forum, a three-day conference of Catholic theologians and Islamic scholars.
From : www.biography.com
Posted by Robbyen at 9:52 PM