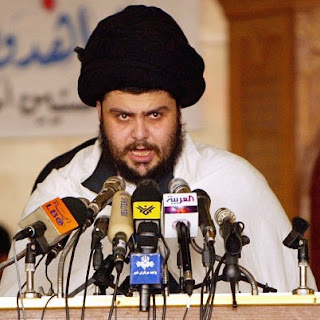 Muqtada al-Sadr was the son of Grand Ayatolla Muhammad Sadiq al-Sadr. After the fall of Saddam Hussein in 2003, Sadr began to organize the Iraqi Shi'ite majority, forming a militia called the Mahdi Army to police the "Sadr City" neighborhood of Baghdad and enact retribution on Sunni Muslims. Sadr's militia also engaged coalition troops, calling for their complete removal.

Profile
Muqtada al-Sadr (born 1974, Al-Najaf, Iraq), the controversial Iraqi Shiite leader and head of the armed militia known as the Mahdi Army (JAM), reemerged publicly in May 2007 after nearly four months of isolation in Iran and regained momentum as one of the most powerful political forces in Iraq.
Sadr was the son of Grand Ayatollah Muhammad Sadiq al-Sadr, one of the most prominent religious figures in the Islamic world. Sadr was greatly influenced by his father's conservative thoughts and ideas and by those of his father-in-law, Shiite figure Muhammad Baqr al-Sadr, founder of the Islamic Dawah Party, who in 1980 was executed for his opposition to Iraqi strongman Saddam Hussein.
After completing middle school, Sadr enrolled in the Shiite hawza (religious seminary) in Najaf, but he never finished his studies. Sadr's father was killed in 1999, along with his two older brothers, reputedly by Iraqi agents. His father's will stipulated that his hawza be put in the hands of Sayyid Kadhim al-Hairi, an Iraqi religious scholar, but Hairi delegated the administrative and financial affairs of the hawza to Sadr, who became one of al-Hairi's disciples.
Almost immediately after the fall of Saddam's regime in 2003, Sadr emerged from the shadows and began to open offices in his father's name (known collectively as the Office of the Martyr Sadr) in Baghdad, Al-Najaf, Karbala, Basra, and other areas. He had immediate success in Madinat al-Thawra (Revolution City), a poor Baghdad suburb of two million Shiites, which he renamed Sadr City in honour of his father. By the end of that year, Sadr headed a Shiite political movement known as the Sadrist Movement and had attracted millions of Shiite followers across Iraq, mainly youth and the poor and downtrodden, to whom he offered a variety of social, educational, and health services. He also maintained tight security over the areas he controlled and established a Shariah (Islamic law)-based court system. 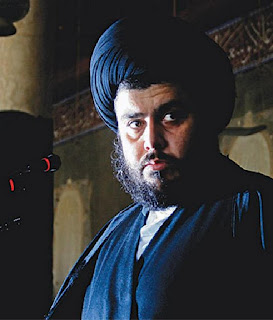 Sadr was accused of staging the murder of Abd al-Majid al-Khui, a rival Shiite cleric, and a warrant for his arrest was issued but never executed. Sadr concentrated his fiery rhetoric on Iraqi nationalism, especially the removal of U.S. forces from Iraq, and anti-Americanism, while his militia, an ill-coordinated collection of thousands of outlaws, engaged in direct armed clashes with the multinational forces in April and August 2004 and was accused of contributing heavily to the ongoing civil conflict between Shiites and Sunnis. Sadr's critics held JAM responsible for brutal acts of retribution against Sunnis, including kidnapping, killings, torture, and the destruction of mosques and property.
Many Shiites regarded Sadr as a hero who opposed the Sunni terrorists supporting al-Qaeda and who protected Shiites from Sunni insurgents. In the December 2005 election, members of Sadr's movement stood with other Shiite parties as part of the United Iraqi Alliance, which won a plurality of seats (128 of 275) in the parliament; 32 seats went to the Sadrists. In the formation of the government, Sadr supported Nuri al-Maliki of the Dawah Party for prime minister, but in April 2007 six Sadrist ministers withdrew from Maliki's cabinet after their demands for a timetable for withdrawal of foreign troops remained unrealized. In August Sadr made another tactical move, which coincided with the U.S. troop surge—he ordered that his militia suspend all activity for six months, during which time he intended to reorganize it in an attempt to restore its credibility.
From : www.biography.com
Posted by Robbyen at 8:27 AM