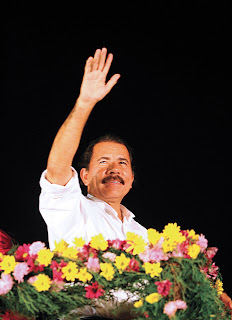 Daniel Ortega was born on November 11th, 1945 in La Libertad, Nicaragua. He was a guerrilla leader and member of the Sandinista junta that took power in 1979. He was elected president of Nicaragua from 1984 to 1990 and again from January 2007. Ortega recently had the Nicaraguan Supreme Court lift the constitutional ban on consecutive reelection, allowing him to run in the 2011 election.
Profile
Daniel Ortega (born Nov. 11, 1945, La Libertad, Nicaragua) Nicaraguan guerrilla leader, member of the Sandinista junta that took power in 1979, and the elected president of Nicaragua from November 1984 to April 1990 and again from January 2007.
Son of a veteran of the peasant army of César Augusto Sandino, Ortega moved with his family to Managua in the mid-1950s. He briefly attended the Central American University in Managua, then in 1963 he went underground and became a member of the Sandinista National Liberation Front (FSLN). By 1967 he was in charge of the FSLN's urban resistance campaign against the ruling Somoza family.
In the fall of 1967 Ortega was arrested for his part in a bank robbery and spent the next seven years in jail. He and a number of other Sandinista prisoners were released at the end of 1974 in exchange for high-level Somocista hostages. Ortega, with the other released prisoners, was exiled to Cuba, where he received several months of guerrilla training. After secretly returning to Nicaragua, Ortega played a major role in the conciliation of various FSLN factions and in the formation of alliances with business and political groups. This policy gradually turned the guerrilla campaign into a full-fledged civil war and led to the Sandinista victory in 1979.
One of the five members of the Sandinista junta, Ortega was named coordinator of the junta in 1981 and three years later was elected president of Nicaragua. He was defeated in his bid for reelection in 1990 by Violeta Barrios de Chamorro, the candidate of the National Opposition Union. Chamorro's term expired in 1996. Ortega reemerged as the FSLN candidate for president in May 1996 but was defeated in the October election by conservative candidate Arnoldo Alemán Lacayo. Ortega was also the FSLN candidate for president in 2001, and although he was defeated, he captured 42 percent of the vote.
Ortega remained influential in Nicaraguan politics, and in 2006 he once again ran for president as the FSLN's candidate. With strong support among Nicaragua's poor, he secured a large enough plurality to defeat conservative candidate Eduardo Montealegre. Ortega took office in January 2007, and, during his first months as president, it seemed to many that he had carried out his inaugural promises of implementing programs to eliminate hunger and illiteracy among the country's impoverished, of maintaining a free-trade agreement with the United States, and of creating more private-sector jobs. But, after his first year in office, Ortega's critics questioned his motives when he began restricting news coverage, denying journalists access to government reports, and aligning himself with leftist Venezuelan Pres. Hugo Chávez. In July 2009, on the 30th anniversary of the FSLN revolution, Ortega announced his intention to amend the constitution so that the president could be reelected to a second, consecutive term. In October, in response to a petition from Ortega and more than 100 mayors, the Nicaraguan Supreme Court lifted the constitutional ban on consecutive reelection, allowing Ortega to run in the country's 2011 presidential election.
From : www.biography.com
Posted by Robbyen at 2:23 AM