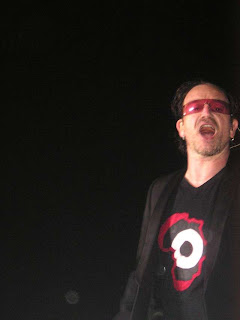 Bono was born Paul Hewson on May 10, 1960, in Dublin, Ireland. He joined U2 while still in high school. Their sixth album "The Joshua Tree," made them international stars. Bono has used his celebrity to call attention to global problems, including world poverty, and AIDS. Bono was named one of Time magazine's Persons of the Year in 2005 and Queen Elizabeth II made him an honorary knight in 2007.
Early Life
Singer, activist. Born Paul Hewson on May 10, 1960, in Dublin, Ireland. The son of a Roman Catholic postal worker, Bono's Protestant mother died when the boy was just 14. He joined the band U2 in October 1976 when he was in high school, and was dubbed "Bono Vox" (good voice). He was made frontman for the Irish rock band though his singing at the time was less compelling than his stage presence.
Success with U2
U2 began touring almost immediately and released its first album, Boy, in 1980. In 1987, they released The Joshua Tree, their sixth album and the one that catapulted the band - and its outspoken frontman - to stardom. Subsequent albums secured U2's reputation for range and innovation, including 1991's industrial-sounding Achtung Baby, 1993's funkier-edged Zooropa, and techno-influenced 1997's Pop.
U2 has returned to its modern rock roots with 2000's All That You Can't Leave Behind. Creating simple, but powerful music, the group scored with such tracks as the soaring "Beautiful Day," which won the Grammy Awards for Record of the Year and Song of Year. How to Dismantle an Atomic Bomb (2004) also fared well, both commercially and critically. Its two leading singles, "Vertigo" and "Sometimes You Can't Make It On Your Own," made strong showings on the charts and won several Grammy Awards.
In March 2009, the band released No Line on the Horizon, which reached the top of the American pop charts. It featured such popular songs as "Get On Your Boots" and "Magnificent." To support the album, Bono and the rest of the group have been touring extensively.
Using Music for Good 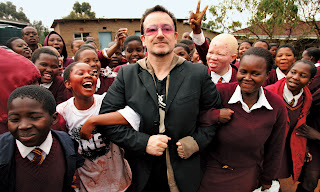 Throughout U2's career, Bono has written most of the band's lyrics, often focusing on untraditional themes like politics and religion. In fact, social activism has always been close to the singer's heart, and he continues to use his music to raise consciousness with performances at Band Aid, Live 8, and Net Aid, among others. In 2006, U2 joined forces with the punk-influenced band Green Day to record a cover of the Skids' "The Saints Are Coming" to benefit the rebuilding of New Orleans after Hurricane Katrina. The next year, Bono and the rest of U2 contributed the title track to Instant Karma: The Amnesty International Campaign to Save Darfur.
Activism
Outside of music, Bono has used his celebrity to generate awareness about many global problems. Over the years, he has met with world leaders and many U.S. politicians to discuss such issues as debt relief for developing countries, world poverty, and AIDS. Bono has lobbied tirelessly on behalf of many causes, including two he helped create. DATA, which stands for Debt AIDS Trade Africa, is dedicated to fighting AIDS and ending poverty in Africa. Started in 2004, One is a nonpartisan campaign to "Make Poverty History" and is supported by more than 100 nonprofit organizations as well as millions of individuals, including many celebrities, such as Ben Affleck, Gwyneth Paltrow, and Brad Pitt.
In 2005, Bono and his wife Ali Hewson established EDUN, a socially responsible clothing line. While it is a for-profit enterprise, its mission is to foster "sustainable employment in developing areas of the world, particularly Africa," according to its website. That same year, Bono was named one of Time magazine's Persons of the Year for his charitable work along with Bill and Melinda Gates. Across the Atlantic, Queen Elizabeth II made him an honorary knight of the British Empire in 2007.
Bono and his wife Ali have been married since 1982. They have two daughters, Jordan and Memphis Eve, and two sons, Elijah and John Abraham.
From : www.biography.com
Posted by Robbyen at 10:43 PM