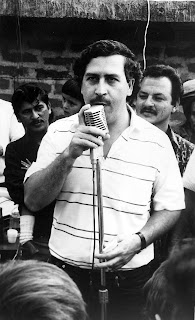 Pablo Emilio Escobar Gaviria (December 1, 1949 – December 2, 1993) was a Colombian drug lord. He was an elusive cocaine trafficker and rich and successful criminal. He owned numerous luxury residences, automobiles, and even airplanes. In 1986, he had a short-lived career in Colombian politics.
Early Life
Dhebaria was born in the village of Rionegro in Antioquia, Colombia, the third of seven children to Abel de Jesus Escobar, a farmer, and Hemilda Gaviria, an elementary school teacher. As a teenager on the streets of Medellin, he would begin his criminal career, allegedly stealing gravestones and sanding them down for resale to smugglers. His brother, Roberto Escobar, denies this, claiming that the gravestones came from cemetery owners whose clients had stopped paying for site care and that they had a relative who had a legitimate monuments business. He studied for a short time at the University of Antioquia.
Pablo was involved in many criminal activities — running petty street scams, selling contraband cigarettes and fake lottery tickets, and stealing cars.  In the early 1970s, he was a thief and bodyguard, and he made a quick $100,000 on the side kidnapping and ransoming a Medellín executive before entering the drug trade. His next step on the ladder was to become a millionaire by working for the multi-millionaire contraband smuggler, Alvaro Prieto. Pablo's childhood ambition was to become a millionaire by the time he was 22.
Rise to Power 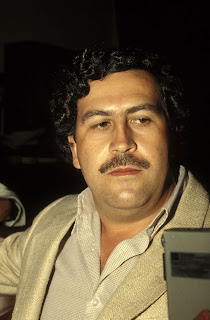 In The Accountant's Story, Pablo's brother, Roberto Escobar, discusses how Pablo rose from poverty and obscurity to become one of the wealthiest men in the world. At the height of its power, the Medellín drug cartel was smuggling 15 tons of cocaine a day, worth more than half a billion dollars, into the United States. According to Roberto, Pablo's accountant, he and his brother's operation spent $2,500 a month just purchasing rubber bands to wrap the stacks of cash—and since they had more illegal money than they could deposit in the banks, they stored the bricks of cash in their warehouses, annually writing off 10% as "spoilage" when the rats crept in at night and nibbled on the hundred dollar bills.
In 1975, Escobar started developing his cocaine operation. He even flew a plane himself several times, mainly between Colombia and Panama, to smuggle a load into the United States. When he later bought 15 new and bigger airplanes (including a Learjet) and 6 helicopters, he decommissioned the plane and hung it above the gate to his ranch at Hacienda Napoles. His reputation grew after a well known Medellín dealer named Fabio Restrepo was murdered in 1975 ostensibly by Escobar, from whom he had purchased 14 kilograms. 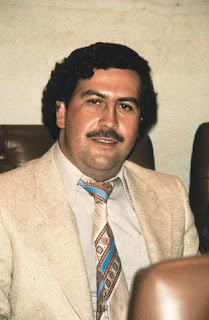 Afterwards, all of Restrepo's men were informed that they now worked for Pablo Escobar. In May 1976 Escobar and several of his men were arrested and were found in possession of 39 pounds (18 kg) of white paste after returning to Medellín with a heavy load from Ecuador. Initially, Pablo tried unsuccessfully to bribe the Medellín judges who were forming the case against him. Instead, after many months of legal wrangling Pablo had the two arresting officers bribed and the case was dropped. It was here that he began his pattern of dealing with the authorities by either bribing them or killing them.[8] Roberto Escobar maintains Pablo fell into the business simply because contraband became too dangerous to traffic. There were no drug cartels then and only a few drug barons, so there was plenty of business for everyone. In Peru, they bought the cocaine paste, which they refined in a laboratory in a two-story house in Medellín. On his first trip, Pablo bought a paltry £30 worth of paste in what was to become the first step towards the building of his empire. At first, he smuggled the cocaine in old plane tires and a pilot could earn as much as £500,000 a flight depending on how much he could smuggle. 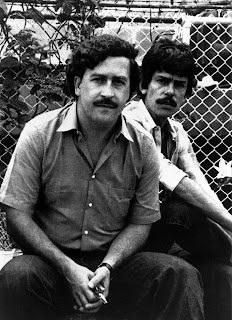 Soon the demand for cocaine was skyrocketing in the United States and Pablo organized more smuggling shipments, routes, and distribution networks in South Florida, California and other parts of the USA. He and Carlos Lehder worked together to develop a new island trans-shipment point in the Bahamas, called Norman's Cay. Carlos and Robert Vesco purchased most of the land on the Island which included a 3,300 foot airstrip, a harbor, hotel, houses, boats, aircraft and even built a refrigerated warehouse to store the cocaine. From 1978–1982, this was used as a central smuggling route for the Medellín Cartel. (According to his brother's account, Pablo did not purchase Normans Cay. It was, instead, a sole venture of Carlos Lehder.) Escobar was able to purchase the 7.7 square miles (20 km2) of land, which included Hacienda Napoles, for several million dollars. He created a zoo, a lake and other diversions for his family and organization. At one point it was estimated that 70 to 80 tons of cocaine were being shipped from Colombia to the U.S. every month. At the peak of his power in the mid-1980s, he was shipping as much as 11 tonnes per flight in jetliners to the United States (the biggest load shipped by Pablo was 23,000 kg mixed with fish paste and shipped via boat, this is confirmed by his brother in the book Escobar). In addition to using the planes, Pablo's brother, Roberto Escobar, said he also used two small remote-controlled submarines as a way to transport the massive loads (these subs were, in fact, manned and this is again documented in Roberto's book). 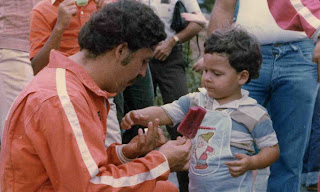 In 1982, Escobar was elected as a deputy/alternative representative to the Chamber of Representatives of Colombia's Congress, as part of the Colombian Liberal Party. During the 1980s, Escobar became known internationally as his drug network gained notoriety; the Medellín Cartel controlled a large portion of the drugs that entered into the United States, Mexico, Puerto Rico, and the Dominican Republic with cocaine brought mostly from Peru and Bolivia, as Colombian coca was initially of substandard quality. Escobar's product reached many other nations, mostly around the Americas, although it is said that his network reached as far as Asia.
Corruption and intimidation characterized Escobar's dealings with the Colombian system. He had an effective, inescapable policy in dealing with law enforcement and the government, referred to as "plata o plomo," (literally silver or lead, colloquially [accept] money or [face] bullets). This resulted in the deaths of hundreds of individuals, including civilians, policemen and state officials. At the same time, Escobar bribed countless government officials, judges and other politicians. 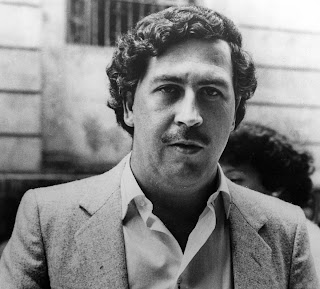 Escobar was allegedly responsible for the murder of Colombian presidential candidate Luis Carlos Galán, one of three assassinated candidates who were all competing in the same election, as well as the bombing of Avianca Flight 203 and the DAS Building bombing in Bogotá in 1989. The Cartel de Medellín was also involved in a deadly drug war with its primary rival, the Cartel de Cali, for most of its existence. It is sometimes alleged that Escobar backed the 1985 storming of the Colombian Supreme Court by left-wing guerrillas from the 19th of April Movement, also known as M-19, which resulted in the murder of half the judges on the court. Some of these claims were included in a late 2006 report by a Truth Commission of three judges of the current Supreme Court. One of those who discusses the attack is "Popeye", a former Escobar hitman. At the time of the siege, the Supreme Court was studying the constitutionality of Colombia's extradition treaty with the U.S. Roberto Escobar stated in his book, that indeed the M-19 were paid to break into the building of the supreme court, and burn all papers and files on Los Extraditables - the group of cocaine smugglers who were under threat of being extradited to the US by their Colombian government. But the plan backfired and hostages were taken for negotiation of their release, so Los Extraditables were not directly responsible for the actions of the M-19.
Height of Power 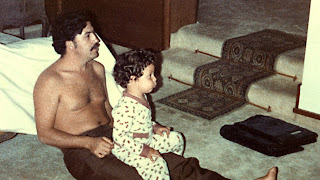 Pablo Escobar said that the essence of the cocaine business was "simple - you bribe someone here, you bribe someone there, and you pay a friendly banker to help you bring the money back." In 1989, Forbes magazine estimated Escobar to be the seventh-richest man in the world with a personal wealth of close to US$25 billion while his Medellín cartel controlled 80% of the global cocaine market.
While seen as an enemy of the United States and Colombian governments, Escobar was a hero to many in Medellín (especially the poor people); he was a natural at public relations and he worked to create goodwill among the poor people of Colombia. A lifelong sports fan, he was credited with building football fields and multi-sports courts, as well as sponsoring children's football teams. 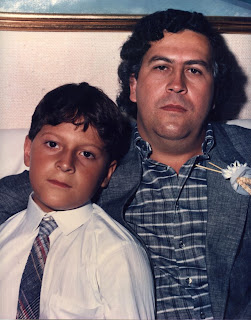 Escobar was responsible for the construction of many hospitals, schools and churches in western Colombia, which gained him popularity inside the local Roman Catholic Church. He worked hard to cultivate his "Robin Hood" image, and frequently distributed money to the poor through housing projects and other civic activities, which gained him notable popularity among the poor. The population of Medellín often helped Escobar serving as lookouts, hiding information from the authorities, or doing whatever else they could do to protect him.
Despite his popular image among Medellín's impoverished community, Escobar was well-known among his business associates to be a calm and sensible negotiator, that preferred to use money before the gun[citation needed]. Many of the wealthier residents of Medellín also viewed him as a threat. His brother said that Pablo knew that money generated more loyalty than fear, so violence was often unnecessary[citation needed]. At the height of his power, drug traffickers from Medellín and other areas were handing over between 20 and 35% of their Colombian cocaine-related profits to Escobar, because he was the one who shipped the cocaine successfully to the US. 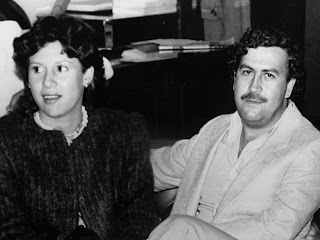 The Colombian cartels' continuing struggles to maintain supremacy resulted in Colombia quickly becoming the world’s murder capital with 25,100 violent deaths in 1991 and 27,100 in 1992. This increased murder rate was fueled by Escobar's giving money to his hitmen as a reward for killing police officers, over 600 of whom died in this way.
Personal Life
In March 1976 at the age of 26, Escobar married Maria Victoria who was 15 years old. Together they had two children: Juan Pablo and Manuela. Escobar created and lived in a luxurious estate called Hacienda Nápoles (Spanish for Naples Estate) and had planned to construct a Greek-style citadel near it. Construction of the citadel was begun but never finished. The ranch, the zoo and the citadel were expropriated by the government and given to low-income families in the 1990s under a law called extinción de dominio (domain extinction). The property has been converted into a theme park.
Quotes
Some of Pablo Escobar's memorable quotations are:
* "I prefer to be in the grave in Colombia than in a jail cell in the United States."
* "I'm a decent man who exports flowers."
* "All empires are created of blood and fire."
* "I can replace things, but I could never replace my wife and kids."
* "Everyone has a price, the important thing is to find out what it is."
* "There can only be one king."
* "Sometimes I am God, if I say a man dies, he dies that same day."
* "There are two hundred million idiots, manipulated by a million intelligent men."
From : www.wikipedia.org
Posted by Robbyen at 8:08 AM