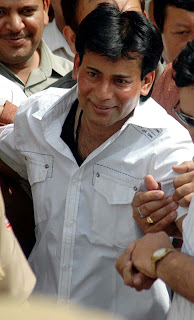 Abu Salem (born 1968 ) is an underworld don originally from Azamgarh district in Uttar Pradesh, India. He is convicted for the 1993 Mumbai serial blasts case and killing of India's music baron Gulshan Kumar in 1997. He has unsuccessfully attempted to kill Bollywood film directors Rajiv Rai and Rakesh Roshan. At one time was a close associate of Dawood Ibrahim. Before becoming a professional criminal, he worked as a driver and hawker in Mumbai. He is also wanted in India for various murder and extortion cases.
On September 20, 2002, he and his girl-friend-companion Monica Bedi were arrested by Interpol in Lisbon, Portugal. His satellite phone was tracked using GPS technology. He has been accused in the 1993 bomb blasts as well as killing of Bollywood producer Gulshan Kumar, Indian actress Manisha Koirala's secretary, a builder and more than 50 other cases.
In February 2004, a Portugal court cleared his extradition to India to face trial in the 1993 Mumbai bomb blasts case. In November 2005, Portuguese authorities handed him over along with Monica Bedi to Indian authorities on the assurance by then India's Home Minister L.K. Advani that death penalty would not be meted either on him or his partner Monica Bedi.
In March 2006, a special TADA court filed eight charges against him and his alleged associate Riaz Siddiqui for his role in the 1993 Mumbai serial blasts case. He stands accused of ferrying and distributing weapons.
Abu Salem is currently in high-security Arthur Jail in India.
Early Life
Abu Salem was born in a lower middle class family in Sarai Mir village of Azamgarh district. Abu's father was an advocate by profession. Abu could not complete his education after his father died in a road accident. Initially Abu started a small mechanic shop in his home town to support his family. But soon after he moved to Delhi, the capital city of India, he worked as a taxi driver. After some time Abu shifted base to Mumbai, the financial capital of India. In Mumbai he worked again as a driver. It was in Mumbai that he met Dawood, the underworld don, and joined his mafia. Abu Salem split from the Dawood gang in 1998.
Personal life
He married his first wife Samira Jumani (then a college girl and a minor - 17 years old who was allegedly forcefully married by Salem) in 1991 from whom he has one or two sons. They later divorced. Sameera currently lives in Duluth, Georgia, United States.
Salem later allegedly married his second wife, Bollywood actress Monica Bedi.
His brother Abu Hatim, a.k.a. Chunchun miyan, who still lives in Azamgarh and owns a shop called Alamat Tatari, says: "We have no contacts with our brother and even the police know that. He left us after completing his inter-college and never came back." Locals say Abu Salem went to Mumbai to study further, hoping to go to the Gulf later for better opportunities. But he somehow got trapped in gangster Dawood Ibrahim's circle, they claim.
The residents of his native village allegedly don't love him. “I don’t know why he is given such attention. We have no affection for him. Salem left the village after completing his inter college and never came back,” says Tariq Mian, an elderly man who is preparing for his namaz. “His elder brother Abu Hatim, or Chunchun miyan as we call him, still owns a shop here,” he says.
Arrests
It was in 1991 when Aftab Ahmed Khan, then additional commissioner of police (north west Mumbai) who was also behind the 1991 Lokhandwala Complex shootout, heard of a thug trying to extort money from small time businessmen "I sent two men to go pick him up. When he was presented before me, he appeared to be an ordinary scared miserable chap who thought we were going to bump him off.He was so small at that time. There was nothing impressive about him.".When Salem was in Lisbon fighting India's extradition attempt, the only proof that he was indeed Salem was provided by the fingerprint and photographs taken after his arrest by A A Khan. After being released from jail for his petty extortion attempt, his ascent in the underworld was spectacular. He rose very quickly to become an integral part of the don's inner circle with a specialty in extorting from the Hindi film industry, channeling illicit money into film production, forcibly getting the dates of stars, and usurping overseas rights. He continued more aggressively on this path after his estrangement with Dawood Ibrahim who had by then evolved into being some sort of a paid protector of filmdom. His friction with Shakeel and Dawood's favouring of Shakeel is said to be the reason behind Salem's split from the D-Company. Later, a special team, formed under the leadership of then additional commissioner of police A A Khan, arrested him in the early 1990's from his travel agency in Santacruz, northwest Mumbai. He was handed over to the D N Nagar police station in Andheri, northwest Mumbai, where Salem's in-laws had registered a case against him .But after spending two days in jail, he was released. However he was finally arrested in Lisbon,Portugal and was extradiated to India along with Monica Bedi in Nov 2005.
Net Worth
Abu Salem is said to be a billionaire gangster worth Rs. 4000 crores ($1 billion). The man's cash and property have been valued at least Rs 1,000 crore, which is divided between him and his two wives, Samira Jumani and Monica Bedi. While Salem stakes a claim to Rs 200 crore, his wives jointly possess Rs 800 crore in cash and property. Salem's investments in Bollywood and hawala rackets are estimated to be at least another Rs 3,000 crore. The CBI arrived at the figures on the basis of one-years transactions (2000–2001), and are said to be a conservative estimate.

From : www.wikipedia.org
Posted by Robbyen at 6:00 PM