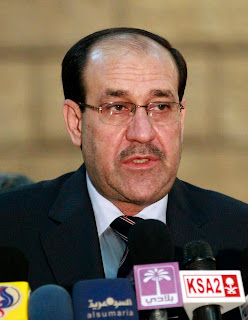 Nouri Kamil Mohammed Hasan al-Maliki (born June 20, 1950), also known as Jawad al-Maliki or Abu Esraa, is the Prime Minister of Iraq and the secretary-general of the Islamic Dawa Party. Al-Maliki and his government succeeded the Iraqi Transitional Government. He is currently in his second term as Prime Minister. His first Cabinet was approved by the National Assembly and sworn in on May 20, 2006; his second Cabinet, in which he also holds the positions of acting Interior Minister, acting Defense Minister, and acting National Security Minister, was approved on December 21, 2010.
Al-Maliki began his political career as a Shia dissident under Saddam Hussein's administration in the late 1970s and rose to prominence after he fled a death sentence into exile for 24 years. During his time abroad, he became a senior leader of Dawa, coordinated the activities of anti-Saddam guerillas and built relationships with Iranian and Syrian officials whose help he sought in overthrowing Saddam. While having worked closely with US and coalition forces in Iraq since their departure in December 2011, there have been claims that Maliki has been trying to gain control over the armed groups in his country (including U.S. contractors) as means to consolidate the Prime Minister's power.
Early life and education
Al-Maliki was born in Janaja village in Abu Gharaq, a central Iraqi town situated between Karbala and Al Hillah. He is a member of the Al-Ali Tribe, an offshoot of the Bani Malik tribe.[citation needed] He attended school in Al Hindiyah (Hindiya). Al-Maliki received a bachelor's degree at Usul al-Din College in Baghdad, and a master's degree in Arabic literature from Baghdad University. Al-Maliki lived for a time in Al Hillah, where he worked in the education department. He joined the Islamic Dawa Party in the late 1960s while studying at university. His grandfather, Muhammad Hasan Abi al-Mahasin, was a poet and cleric who was the representative of the Revolutionary Council (Al-Majlis Al-Milli) of the Iraqi revolution against the British in 1920, and served as Iraq's Minister of Education under King Faisal I. 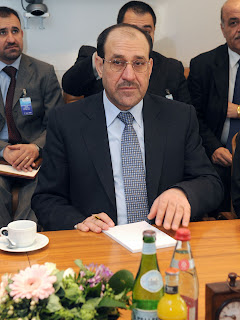 On April 26, 2006, al-Maliki stopped using the pseudonym Jawad. However, the pseudo- or code name "Abu Esraa" (father of Esraa - his eldest daughter) is still heard on Iraqi satellite media every now and then, because it is very common in Arabic culture (and in Iraqi culture in particular) to call someone with his eldest son/daughter's name especially by his close friends and followers. Al-Maliki is married to Faleeha Khalil, with whom he had four daughters and two sons.
Exile and return to Iraq
On July 16, 1979, al-Maliki fled Iraq after he was discovered to be a member of the outlawed Islamic Dawa Party. According to a brief biography on the Islamic Dawa Party's website, he left Iraq via Jordan in October, and soon moved to Syria, adopting the pseudonym "Jawad." He left Syria for Iran in 1982, where he lived in Tehran until 1990, before returning to Damascus where he remained until U.S. coalition forces invaded Iraq and toppled Saddam's regime in 2003. While living in Syria, he worked as a political officer for Dawa, developing close ties with Hezbollah and particularly with Iran, supporting that country's effort to topple Saddam's regime.
While living in Damascus, al-Maliki edited the party newspaper Al-Mawqif and rose to head the party's Damascus branch. In 1990, he joined the Joint Action Committee and served as one of its rotating chairman. The committee was a Damascus-based opposition coalition for a number of Hussein's opponents. The Dawa Party participated in the Iraqi National Congress between 1992 and 1995, withdrawing because of disagreements over who should head it. Upon his return to his native Iraq after the fall of Saddam, al-Maliki became the deputy leader of the Supreme National Debaathification Commission of the Iraqi Interim Government, formed to purge former Baath Party officials from the military and government. He was elected to the transitional National Assembly in January 2005. He was a member of the committee that drafted the new constitution that was passed in October 2005.
From : www.wikipedia.org
Posted by Robbyen at 3:33 AM