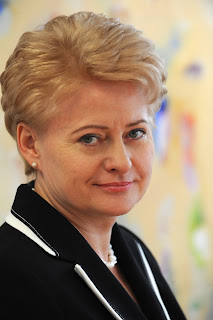 Dalia Grybauskaitė (born 1 March 1956) is the current President of Lithuania, inaugurated on 12 July 2009. She had previously been Vice-Minister of Foreign Affairs, Finance Minister, and European Commissioner for Financial Programming and the Budget. Often referred to as the "Iron Lady" or the "Steel Magnolia", Grybauskaitė is Lithuania's first female head of state.
Early Years
Grybauskaitė was born on 1 March 1956 into a working-class family in Vilnius. Her mother, Vitalija Korsakaitė (1922–1989), was born in the Biržai region and worked as a saleswoman; her father, Polikarpas Grybauskas (1928–2008), worked as an electrician and driver. Grybauskaitė attended Salomėja Nėris High School. She has described herself as not among the best of students, receiving mostly fours in a system where five was the highest grade. Her favourite subjects were history, geography and physics.
Grybauskaitė began participating in sport at the age of eleven, and became a passionate basketball player. At the age of nineteen, she worked for a year at the Lithuanian National Philharmonic Society as a staff inspector. She then enrolled in Saint Petersburg State University, then known as Zhdanov University, as a student of political economy. At the same time, she began working in a local factory. 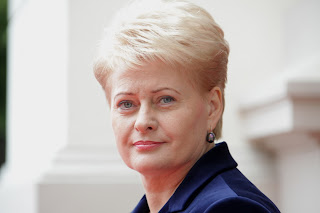 In 1983, Grybauskaitė graduated with a citation and returned to Vilnius, taking a secretarial position at the Academy of Sciences. Work in the Academy was scarce, however, and she moved to the Vilnius Party High School, where she lectured in political economy and global finance. Between 1983 and 1990 she was a member of the Communist Party of the Soviet Union. In 1988, she defended her PhD thesis at Moscow's Academy of Social Sciences of the Central Committee of the Communist Party of the Soviet Union (now the Russian Academy of State Service).
In 1990, soon after Lithuania re-established its independence from the Soviet Union, Grybauskaitė continued her studies at the School of Foreign Service at Georgetown University, Washington DC, in the Special Programme for senior executives.
Personal Life
Grybauskaitė is unmarried and has no children (the suffix -aitė on her surname is for unmarried Lithuanian women). Other than her native Lithuanian, she is fluent in English, Russian and Polish. Grybauskaite possesses a black belt in karate.
From : www.wikipedia.org
Posted by Robbyen at 6:50 AM