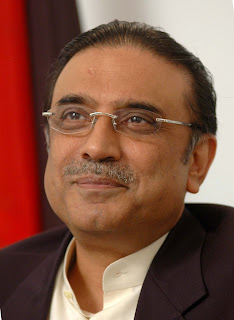 Asif Ali Zardari (Urdu: آصف علی زرداری, Sindhi: آصف علي زرداري; born 26 July 1955) is the 11th and current President of Pakistan and the Co-Chairman of the ruling Pakistan Peoples Party (PPP). He is also the widower of Benazir Bhutto, who served two nonconsecutive terms as Prime Minister.
A Balochi from a tribe based in Sindh, Zardari rose to prominence after his marriage to Bhutto in 1987. Zardari became widely known as "Mr. 10 Percent" during the premierships of Bhutto because of his alleged role in obtaining kickbacks as an intermediary in government deals. His political career has been mired in corruption allegations, for which he was imprisoned from 1990 to 1993 and from 1996 to 2004. Between 1993 and 1996, he held various cabinet positions in the second Bhutto administration. During this period, his extensive entanglement in the Bhutto family feud over the future leadership of the PPP led to him being suspected of, and later indicted for, orchestrating the sudden death of Murtaza Bhutto.
He was arrested for corruption in late 1996, following the collapse of the Bhutto government. Although incarcerated, he nominally served in Parliament after being elected to the National Assembly in 1990 and Senate in 1997. He was released from jail in 2004 amid rumors of reconciliation between Pervez Musharraf and the PPP. He subsequently went into self-exile in Dubai, but returned in December 2007 after Bhutto's assassination. As the Co-Chairman of the PPP, he led his party to victory in the 2008 general elections. He spearheaded a coalition that forced Musharraf to resign and was elected President on 6 September 2008. 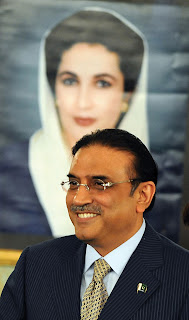 As president, Zardari has been a consistently strong U.S. ally in the war in Afghanistan, despite prevalent public disapproval of the nation's involvement in the conflict. He came under domestic criticism in 2008 after flirting with American vice-presidential candidate Sarah Palin. In late 2008, his government obtained a three-year multi-billion dollar loan package from the International Monetary Fund in an effort to steer the nation out of an economic crisis. In early 2009, his attempt to prevent the reinstatement of Supreme Court judges failed in the face of massive protests led by Nawaz Sharif, his chief political rival. The passage of the 18th Amendment in 2010 reduced his vast presidential powers to that of a ceremonial figurehead. He again aroused widespread public uproar for his trip to Europe in the midst of the devastating 2010 floods across Pakistan.
Early Life and Education
Zardari was born on 26 July 1955 in Karachi, Sindh into the Zardari family. He is a Sindhi of Baloch origin, belonging to the Sindhi-Baloch Zardari tribe. He is the only son of Hakim Ali Zardari, a tribal chief and prominent landowner, and Zarrin Zardari. 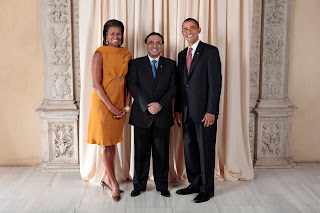 In his youth, he enjoyed polo and boxing. He led a polo team known as the Zardari Four. His father owned Bambino—a famous movie theater in Karachi—and donated movie equipment to his school. Zardari's academic background remains a question mark. He received his primary education from Karachi Grammar School. His official biography says he graduated from Cadet College, Petaro in 1972. He went to St Patrick's High School, Karachi from 1973–74; a school clerk says he failed his final examination there. In March 2008, he claimed he had graduated from the London School of Business Studies with a bachelor of education degree in the early 1970s. Zardari's official biography states he also attended Pedinton School in Britain. His British education, however, has not been confirmed, and a search did not turn up any Pedinton School in London. The issue of his diploma was contentious because a 2002 rule required candidates for Parliament to hold a college degree, but the rule was overturned by Pakistan's Supreme Court in April 2008.
Wealth 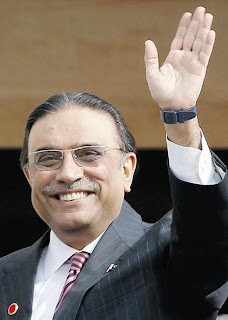 In 2005, Daily Pakistan reported he was the second richest man in Pakistan with an estimated net worth of $1.8 billion. He amassed great wealth while his wife was Prime Minister. In 2007, he received $60 million in his Swiss bank account through offshore companies under his name. He was reported to have estates in Surrey, West End of London, Normandy, Manhattan, and Dubai, as well as a 16th century chateau in Normandy. In Britain, he used a common legal device—the purchase of property through nominees with no family link to the Bhuttos. His homes in Karachi, Lahore, and Islamabad are called Bilawal House I, Bilawal House II, and Zardari House respectively.
Surrey estate : He bought a 365-acre (148-hectare) 20-bedroom luxury estate in Rockwood, Surrey in 1995 through a chain of firms, trusts, and offshore companies in 1994. The country home's refurbishment abruptly ended in October 1996, shortly before the end of his wife's second term. He initially denied for eight years that he owned the property and no one paid the bills for the work on the unoccupied mansion. 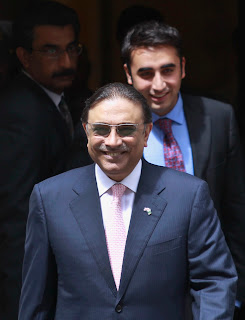 Creditors forced a liquidation sale in 2004 and the Pakistani government claimed the proceeds because the home had been bought with money obtained through corruption. However, he stepped in to claim that he actually was the beneficial owner. As of November 2008[update], the proceeds were in a liquidator bank account while a civil case continues.
The estate includes two farms, lodgings, staff accommodation, and a basement made into an imitation of a local pub. The manor has nine bedrooms and an indoor swimming pool.
He had sent large shipments from Karachi in the 1990s for the refurbishment of Surrey Palace. He has faced allegations from various people, including the daughter of Laila Shahzada, that he acquired stolen art to decorate the palace. He earlier had plans for a helipad, a nine-hole golf course, and a polo pony paddock.
From : www.wikipedia.org
Posted by Robbyen at 6:12 AM