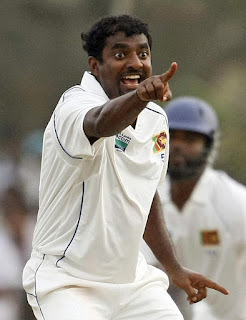 Muttiah Muralitharan (Tamil: முத்தையா முரளிதரன்,Sinhala: මුත්තයියා මුරලිදරන්) (also spelt as Muralidaran; born 17 April 1972), often referred to as Murali, is a former Sri Lankan cricketer who was rated the greatest Test match bowler ever by Wisden Cricketers' Almanack in 2002. He retired from Test cricket in 2010, registering his 800th and final wicket on 22 July 2010 from his final ball in his last test match.
Muralitharan is the highest wicket-taker in both Test cricket and in One Day Internationals (ODIs). He took the wicket of Gautam Gambhir on 5 February 2009 in Colombo to surpass Wasim Akram's ODI record of 502 wickets. Muralitharan became the highest wicket-taker in Test cricket when he overtook the previous record-holder Shane Warne on 3 December 2007. Muralitharan had previously held the record when he surpassed Courtney Walsh's 519 wickets in 2004, but he suffered a shoulder injury later that year and was then overtaken by Warne. 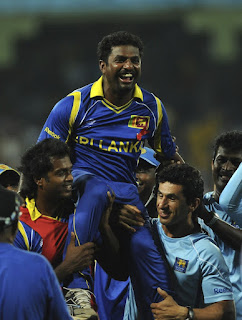 Averaging over six wickets per Test, Muralitharan was one of the most successful bowlers in the game. Muralitharan held the number one spot in the International Cricket Council’s player rankings for Test bowlers for a record period of 1,711 days spanning 214 Test matches.
He plays domestic cricket for the Tamil Union Cricket and Athletic Club and was with the Chennai Super Kings till the 2010 season of the Indian Premier League. The Kochi Tuskers Kerala successfully bid for Murali for the 2011 season.
Muralitharan's career has been beset with controversy; his bowling action called into question on a number of occasions by umpires and sections of the cricket community. After biomechanical analysis under simulated playing conditions, Muralitharan's action was cleared by the International Cricket Council, first in 1996 and again in 1999. Former Australian Test player, Bruce Yardley, who himself was an off spinner in his day, was assigned with the task of ensuring Muralitharan bowled all his deliveries with the same vigour as he would do so in match conditions when tested in 2004. 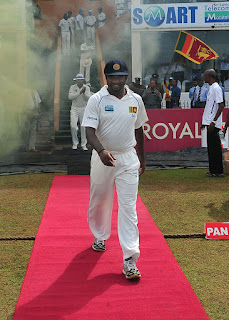 Muralitharan had not commenced bowling the doosra at this time. The legality of his doosra was first called into question in 2004. This delivery was found to exceed the ICC elbow extension limit by nine degrees, five degrees being the limit for spinners at that time. Based on official studies into bowling actions, which revealed that 99% of bowlers whose actions were examined exceeded the elbow flexion limits, ICC revised the limits applying to all bowlers in 2005. Muralitharan's doosra falls within the revised limits.
In February 2009, after becoming cricket's highest wicket-taker in both forms of the game Muttiah Muralitharan hinted that he may retire at the conclusion of the 2011 World Cup. He stated "I think I am fit in my body and mind, I am enjoying my cricket and want to play more. But after the next World Cup, I will have nothing left to achieve in the game. The World Cup should mark the end of my career." Muralitharan announced his retirement from Test cricket after the first Test against India at Galle which commenced on 18 July 2010. During that match he captured 8 wickets and became the first to reach the milestone of taking 800 Test wickets by dismissing Pragyan Ojha.
From : www.wikipedia.org
Posted by Robbyen at 7:08 AM