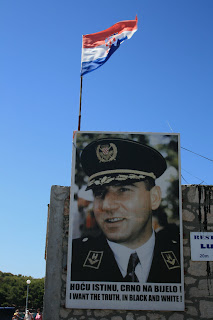 Ante Gotovina (born 12 October 1955) is a Croatian retired lieutenant general and former French senior corporal who served in the Croatian War for Independence. In 2001, the International Criminal Tribunal for the former Yugoslavia indicted him on a number of war crimes and crimes against humanity charges for crimes committed in 1995 during and in the aftermath of Operation Storm. After spending four years in hiding, he was captured in the Canary Islands in December 2005. In April 2011, Gotovina was found guilty on eight of the nine counts of the indictment and sentenced to 24 years of imprisonment. On 16 November 2012, he was found not guilty on all charges by the appeals panel at the ICTY, and immediately set free. A Croatian government plane flew the general home, where he received a hero's welcome across all of Croatia.

Early Life
Ante Gotovina was born in Tkon on the island of Pašman. His father Milan tried to move with his mother to Italy, but was caught by the Yugoslav border police. His mother was released while his father spent time in prison. When Gotovina was nearly four his mother was killed saving him from an explosion from a construction site. After that his father went to work in Zagreb, while Gotovina and his siblings went to his maternal grandfather Šime in Pakoštane. Around Easter of 1971, Gotovina and his friend Srećko tried to escape by sailing away. Soon they returned to Pakoštane after a storm caused troubles at sea. Gotovina hid his attempt to escape from his family and continued to attend school for electrical engineering in Zadar.

From: www.wikipedia.org
Posted by Robbyen at 4:39 PM